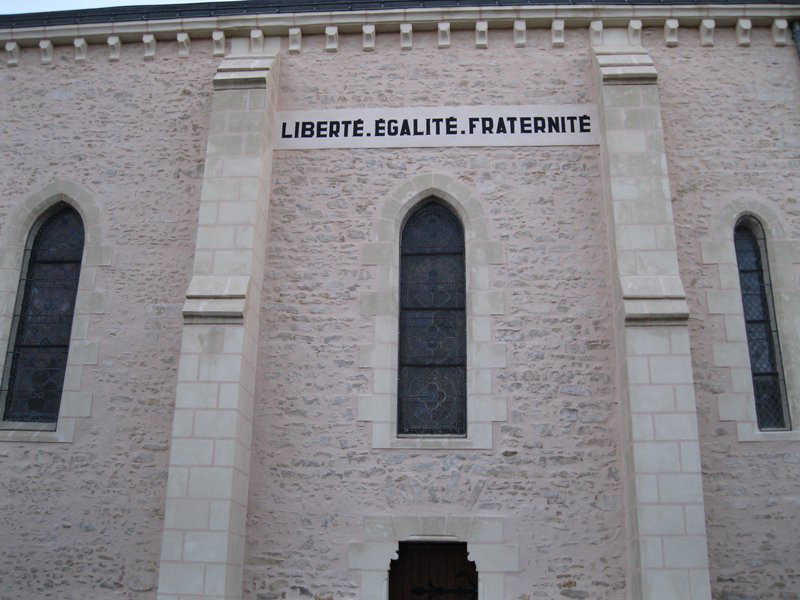 Located in the north of the department of Deux-Sèvres, three kilometers north of Thouars, the commune of Sainte-Verge has a name that deserves attention... .

According to some people, the commune takes its name from a young shepherdess of the IVth century answering to the sweet name of Virgana or Viergue who lived in a domain named the Forest in the surroundings of Thouars. This young girl would have been killed after her conversion, at the age of thirteen, by her pagan boss.

Another version says that Virgana was a tall girl whose family was persecuted and who was forced to hide in the woods.

Finally, the popular belief retained the version of the shepherdess.

When she died, she was buried in the church, next to the high altar, with a distaff with a handle of hemp and its spindle engraved on her tomb.

It is at this time that the parish and the church took the name of Sainte-Viergue.

It was overturned and the ashes of Virgina were dissipated.

However, the faithful of the parish continue to venerate her. They scraped the ashes and mixed them with water from a fountain.

The resulting drink was used to fight fever.

But how did Sainte-Viergue lose her "I" and her "U"?

The church of Sainte-Verge, a real curiosity...

The church of Sainte-Verge is one of the rare churches in France to have the motto of the Republic "Liberty, Equality, Fraternity" engraved in its stone.

The current church is a modern monument built in 1878. This church, founded by the religious of Saint Jouin de Marnes who came to settle near the tomb of the little shepherdess of the Forest, was falling into ruins.

In 1803, a chapel of the church collapsed, then in 1809 it was the roof that suffered major damage following a violent storm. In 1877, the municipality decided to rebuild the church.

In addition to its very "republican" inscription, the building presents a small rarity, its choir facing west, whereas since the 6th century, it is usually oriented towards the east.

The church of today is a source of curiosities with its openwork bell tower (known as "lace") and its base made of "pierre des grisons", a material extracted from a local quarry.

Also worth seeing is the Château de La Forêt, a monument that is an attraction for vacationers during a stay in the region, as well as the washhouse, restored by an elected municipal official in 2011.

The wash house is located in the rue de la mairie.

Another curiosity, the bread oven.

Every year at the time of Saint-Honoré, Patron Saint of Bakers, the village re-lights the oven during the bread festival.

Saint-Verge is honored as Saint Virginia, every January 7th.

The Castle of Cherveux, a must see...

The Navel of the World is in Deux-Sèvres

label Just for the fun... Recreation and animal parks Amazing... isn't it?