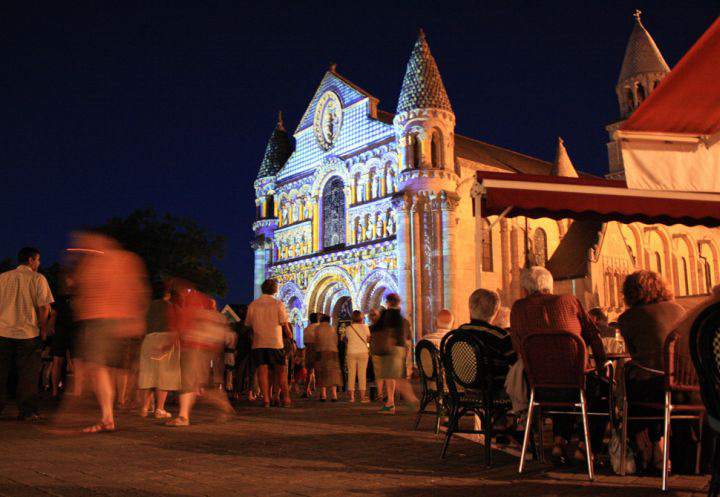 Poitiers, a city with an exceptional architectural heritage

Provincial capital since the Gallo-Roman period, university town, Poitiers has an exceptional architectural heritage, enriched over the years. Its historic center is home to more than 86 listed monuments, in the heart of a landscape dominated by Romanesque heritage.

In Poitiers, many sites are to be discovered and visited...

- The church of Notre-Dame-la-Grande (11th - 12th century), built from the 11th century, a true jewel of Romanesque art, famous for its sculpted façade. Reviving the medieval tradition of painted churches, the illumination of the "Polychromies" (on summer evenings and during the Christmas vacations) invites the spectators to discover the details of this jewel of Romanesque art.
- Saint Peter's Cathedral (12th - 13th century). Begun at the time of Eleanor of Aquitaine and Henry II Plantagenet in the Angevin Gothic style, its dimensions are imposing. Rich in exceptional furniture (Clicquot organs, stained glass windows, 13th century stalls), it has recently revealed magnificent 13th century paintings, a true treasure of the radiant Gothic.
- The Baptistery of Saint John (5th to 12th century). Considered as one of the oldest testimonies of Christian Gaul, its foundations date from the 5th century. In addition to the baptismal vat, you can admire a collection of sarcophagi and beautiful Romanesque paintings.
- The Palace of Justice (12th - 14th century). The former residence of the Counts of Poitou - Dukes of Aquitaine. Precious testimony of the civil architecture of the time, its large room of the "Pas Perdus" takes the visitor back to the time of Eleanor of Aquitaine.
- The Church of Saint-Hilaire-le-Grand: this remarkable Romanesque building, a place of pilgrimage on the road to Compostela, classified as a UNESCO World Heritage Site, is dedicated to the first attested bishop of Poitiers.

- The Church of Sainte-Radegonde (11th to 15th century) is one of the oldest churches in Poitiers.

In Poitiers, you should also see...
- The Holy Cross Museum, whose permanent collections include regional archaeology, the Fine Arts Department which covers the major artistic movements from the end of the 18th to the middle of the 20th century, and a section from Poitou. Sculpture is also well presented there, with works by Auguste Rodin and Camille Claudel, whose works are in the museum's second largest French public collection.
- The Espace Mendès France, which owes its origin to researchers from the University of Poitiers, activists of popularization and popular education, who went, in the 1980s, to meet residents in the neighborhoods to discuss scientific topics and demonstrate, "manipulated" to support, that science could be accessible, even enjoyable.
For relaxation: the Park of Blossac, the Garden of Plants, the Promenade du Pré l'Abbesse.

Poitiers is located 10km from the Futuroscope.

The Tourist Office of Grand Poitiers offers guided tours, for groups, for children, by theme, by night... and invites you to discover its permanent exhibition room "Women, Men, a city".