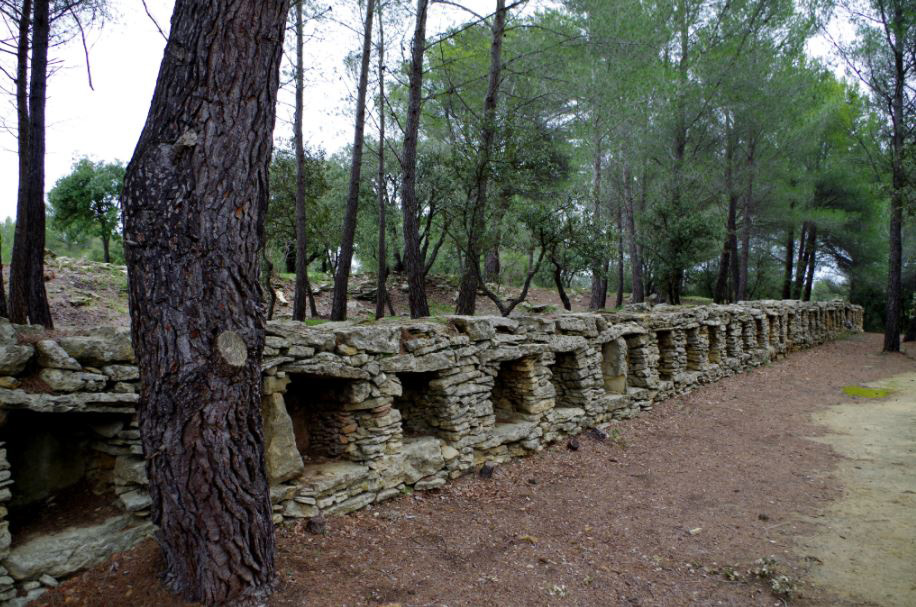 The wall of bees

If one day you pass near Salon de Provence, on the side of the Aix-en-Provence highway, you will certainly notice a dry stone wall resembling an apiary. It is the bee wall of Cornillon-Confoux.

Nowadays, hives are usually made of wood and placed on pallets.

This way, beekeepers can handle them easily and protect them from growing grasses that may interfere with the bees' flight every time they enter or leave the hives.

The first bee walls are the work of nature itself.

Bees built their wax combs in the cavities of rocks.

Then, men imitated them and began to build these beehives in hard ground.

In France, these beehive enclosures can be found almost everywhere, especially in monasteries and castles, and less frequently in country houses.

In Provence, the first bee walls date back to the 18th century.

And they multiplied in the region, most probably in the 19th century to cope with the shortage of sugar caused by the English blockade during the Napoleonic wars.

The hives were made of straw, wood and sometimes even cork.

The bee wall of Cornillon-Confoux is located in the Bouches-du-Rhône, in the middle of the pine forest.

It is 60 meters long and integrated into a "restanque", a retaining wall made of dry stones.

Its general condition is rather good overall.

It is ranked second in France, after Tessy-sur-Vire in the Manche department.

The bee wall of Cornillon-Confoux is composed of 12 dry stone niches, 15 cm from the ground for better insulation from cold and humidity.

It has 53 cells, whereas there were more than 200 originally. Each one is covered with a cut stone that acts as a lintel.

The bottom of the alveolus is lined with a large flat stone in the vertical.

Above, there are 1 to 2 rows of flat cut stone to consolidate the structure and protect the hive from the weather.

The cells are separated by a single carved stone or thick vertical built stones.

At their base, they are slightly inclined forward, which allows water to drain easily and quickly.