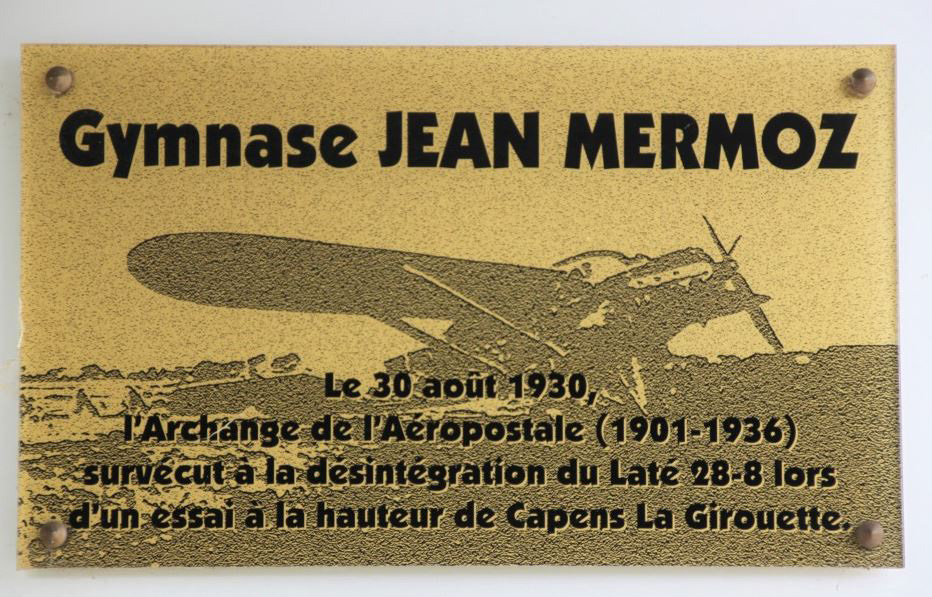 info_outline
You are here: Home / Regions / Occitany / 31-Haute-Garonne / The accident of Jean Mermoz

The accident of Jean Mermoz

On August 23rd 1930 Jean Mermoz was in Paris to marry Gilberte Chazottes, whom he had met in Argentina.

The religious marriage is celebrated on August 25 at the church of Saint-François Xavier.

Back in Toulouse, Mermoz can start the tests of the Laté 28-8, with Jean Gonord, new test pilot of the Société Industrielle des Avions Latécoère.

The Laté 28-8 is a very long-range variant of the Laté 28, equipped with a huge wing and an enlarged tail, which had to tackle the records of distance and duration.

On August 30, 1930 Jean Mermoz takes off over Capens, south of Toulouse... it is the accident.

In a letter dated September 4 to his mother Jean Mermoz tells him about the accident.

"At 1000 meters, as I was descending from 5000 meters, where I had climbed loaded to 6000 Kg, I was doing a speed base of three minutes, I felt the fuselage twist and disarticulate.

I wanted to open the side door to parachute out but I couldn't: the plane was in a spin and the deformed fittings prevented me from landing. I then threw myself into the open hatch above my head, but I couldn't get through because of my shoulders and with my head out, I saw the left wing come off. The 1200 liters fuel tank opened behind me, flooded me with gasoline then the whole thing shredded and I was one of the debris that the plane literally pulverized as if it had been hit by a full shell.

I made about one hundred and fifty to two hundred meters of free fall before the parachute was opened, and then, I suddenly felt hung in the void with a violent jolt.

I looked up and saw pieces of the aircraft falling down on my parachute and tearing a lot.

One of them removed a 1m50 piece and my speed of fall accelerated.

The tail of the plane passed 50 meters away from me.

I received myself on my legs but the jolt broke me in two. »

Jean Mermoz, dizzy from his fall, was collected and transported by car to the Languedoc clinic in Toulouse.

In September 2016, the community of communes Garonne Louge (Capens, Longages, Mauzac, Noé), baptized the gymnasium of the college Nelson Mandela.

"Jean Mermoz", in memory of the accident of Laté 28-8 at the place called "La Girouette" above the town of Capens.