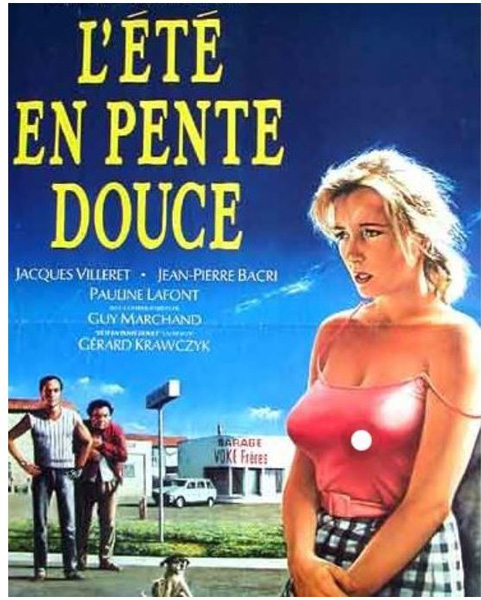 The gently sloping summer... in Martres-Tolosane

"L'été en pente douce" (Summer on a Gentle Slope) shot in 1986 in Martres-Tolosane. is a film by Gérard Krawczyk, based on the eponymous noir novel by Pierre Pelot with Jacques Villeret, Jean-Pierre Bacri, Pauline Lafont, Jean Bouise and Guy Marchand.

Fane (Jean-Pierre Bacri) lives in an underprivileged peri-urban city and works as a warehouseman in a supermarket.

Following the death of his mother, he decides to move into the family home in a village in southwestern France and write detective novels.

He leaves accompanied by Lilas (Pauline Lafont), who was the concubine of one of his neighbors and friends.

He also takes in his new home his mentally handicapped brother, Mo (Jacques Villeret), who refuses to return to a psychiatric hospital.

The life of the household quickly proves to be complicated, on the one hand because of Mo's childish behavior, but mainly because of Lilas' strange personality.

In addition, the Voke brothers, Olivier (Jean Bouise) and André (Guy Marchand), owners of the neighboring garage, have views of the house that would allow them to expand.

André is also looking at Lilas.

For his part, Lilas' former friend has regrets and would like to renew his relationship with her.

Forced to admit that writing novels is not as easy as he thought, Fane has another idea.

He decides to reopen the bar his mother used to run, with the help of Mo and Lilas, whom he is going to marry.

Unfortunately, the Voke brothers will do anything to stop them.

L'Été en pente douce" by Gérard Krawczyk, filmed during the summer of 1986 in Martres-Tolosane, brought together some 300 extras who met in the village hall of Martres.

A garage was set up in a former petrol station, on the edge of the old national road.

The couple managing the Casino store played their own role.

The Hotel Castet became the "canteen" of the film crew.