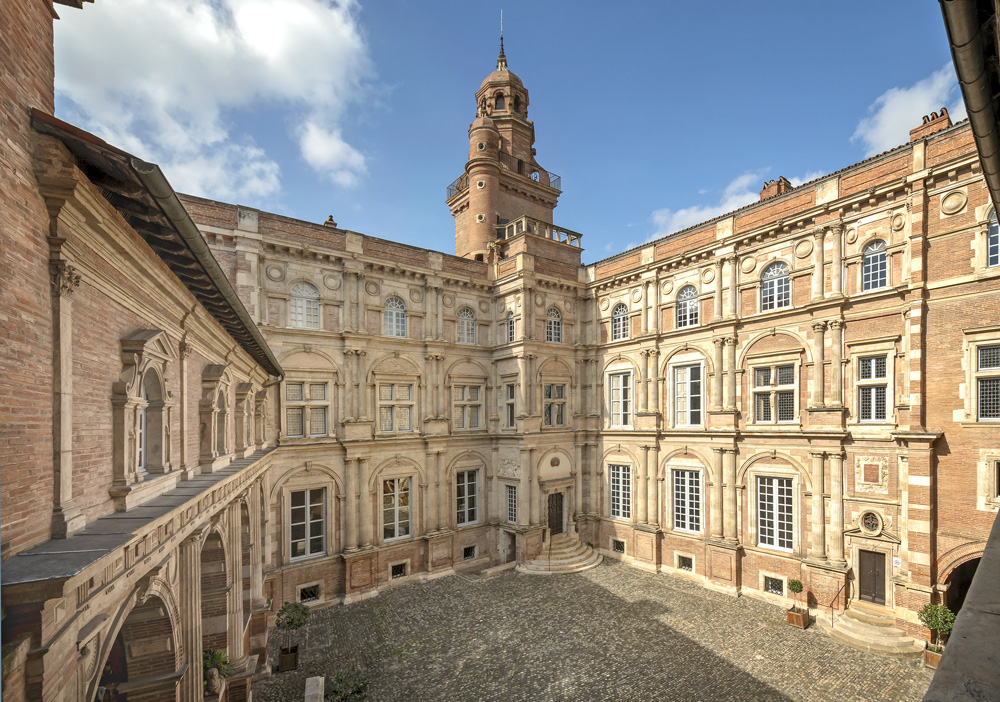 info_outline
You are here: Home / Regions / Occitany / 31-Haute-Garonne / The Hôtel d'Assézat, the magnificent setting of the Bemberg Foundation

The Hôtel d'Assézat, the magnificent setting of the Bemberg Foundation

The Hôtel d'Assézat is a private mansion built in 1555-1557 according to the plans of Nicolas Bachelier, the greatest Toulouse architect of the Renaissance, then completed between 1560 and 1562 by his son, Dominique Bachelier.

The monumental entrance portal hides an inner courtyard, renovated in 1993, where the classic facades of the hotel appear. It houses the Bemberg Foundation Museum and its art collections, notably paintings, from the 15th to the beginning of the 20th century.

It has been a listed building since 1914.

We owe this magnificent mansion to a rich merchant, Pierre d'Assézat who made his fortune through the pastel trade in the 16th century and was Capitoul in 1552 and 1562.

If the courtyard is made of bricks, the decoration is made of stone creating an aesthetic effect.

On both sides of the courtyard, a three-level elevation superimposing the three classical orders - Ionic, Doric and Corinthian - follows the hierarchy of orders established by the Treaty of Serlio.

The imposing stair tower at the corner rises high enough to be visible in the distance.

Together with the loggia, it contains all the elements that make up a Renaissance mansion.

It is one of the first manifestations of French classicism, along with the Château de Caumont also built by Nicolas Bachelier in 1535, and the Cour Carrée du Louvre built by Pierre Lescot from 1546 onwards.

The main part of the hotel seems to have been completed as early as 1562, as all the components visible today were already there at that date.

Pierre d'Assézat was only able to enjoy his hotel occasionally. Converted to Calvinism, probably towards the end of the 1550s, he was chased out of the city and dispossessed of his hotel in 1562 after the failed coup de force by the Capitouls of the Year - of which he was a member - all Protestants, aimed at toppling Toulouse into the Huguenot camp.

During these troubled years he seems to have lived intermittently in Toulouse to look after his affairs, sometimes rehabilitated in his honours and rights, sometimes robbed and again forced to flee. He financed the Prince de Condé, champion of the Protestants, without counting the cost, but in 1572 he ended up abjuring the reformed religion and taking an oath of loyalty to the King. He died in 1581 in his hotel, which remained the property of the Assézat family until 1761.

Théodore Ozenne, who bought the building in the nineteenth century, soon bequeathed it to the City so that it could host learned societies, including the oldest literary society in Europe, the Académie des Jeux Floraux.

This is still one of its vocations today. From 1980, the city began the restoration of the old buildings as well as the construction of a modern extension.

The Bemberg Foundation is today the flagship of the Hôtel d'Assézat.

In 1994, Georges Bemberg, a rich lover of Argentine art, lent the sperbic collection he had gathered - 1,100 works divided between paintings, sculptures and objets d'art - to the municipality for 99 years in order to make it accessible to the public.

Aeroscopia, the aviation museum with the A 380