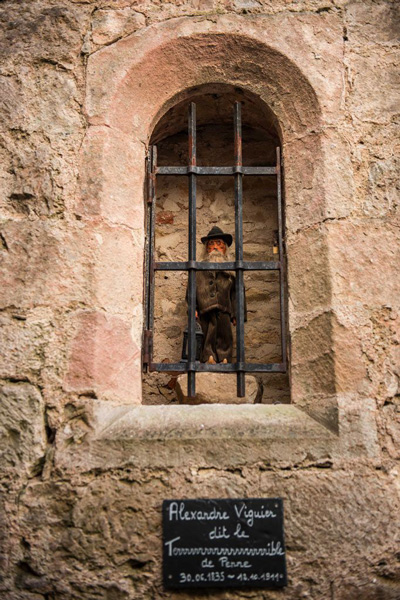 info_outline
You are here: Home / Regions / Occitany / 81-Tarn / The « Terrrrrrrrrrrrrrrrrrrible » from Penne

A regionally renowned surveyor, he was very gifted at disentangling land disputes, which earned him the nickname "terrible de Penne".

The Terrible thought he was the victim of a machination fomented by his wife with the help of justice to cause her loss.

We owe him various printed pamphlets including "The Great Lantern", "The Third Echo of the Trumpet of Jericho", "The Great Sparrowhawk", ...

For him the French nation was in danger and his mission was to save it and to enlighten justice.

It remained lit until October, when, considered a danger to public order, he was imprisoned for three days.

Armed with his lantern, he walked all over the fairs and various towns.

It was in October 1896, that he took the train to Paris in order to go and enlighten the justice system.

Due to money worries and marital problems, he was forced to sell his farm in 1887.

From then on, he began his public life, grew beard, hair and nails and went out on the roads carrying a large lantern to "enlighten the employees of justice of the nation and the whole world ... to avoid war and make European peace".

On the occasion of Tsar Nicholas II's visit to Paris on 6 October 1896, he took the train to the capital to ask the Tsar to abolish slavery in Russia.

No sooner had he arrived than he was locked up in the Saint-Anne asylum.

Recognized as not insane, he was released a few months later with his beard and hair cut.

Back in Penne, he continues his political and ideological struggle on the roads of the canton in the amused indifference of his fellow citizens.

He ran for the first time in the legislative elections of January 1893.

His programme called for global disarmament and the redistribution of wealth in order to close the gap between rich and poor.

What to see around Penne

An interpretive tour will teach you everything there is to know about this unique site in Occitania, including its castle.

Downtown Penne is charming, with its 13th century church and the Chapelle Sainte-Madeleine des Albis.

To the south of the town is the Grésigne State forest, with a colossal oak forest of 3600ha.

The territory of the town and its surroundings is classified as a Natural Zone of Ecological, Faunistic and Floristic Interest.

Visit the Castle of Bruniquel near the town.