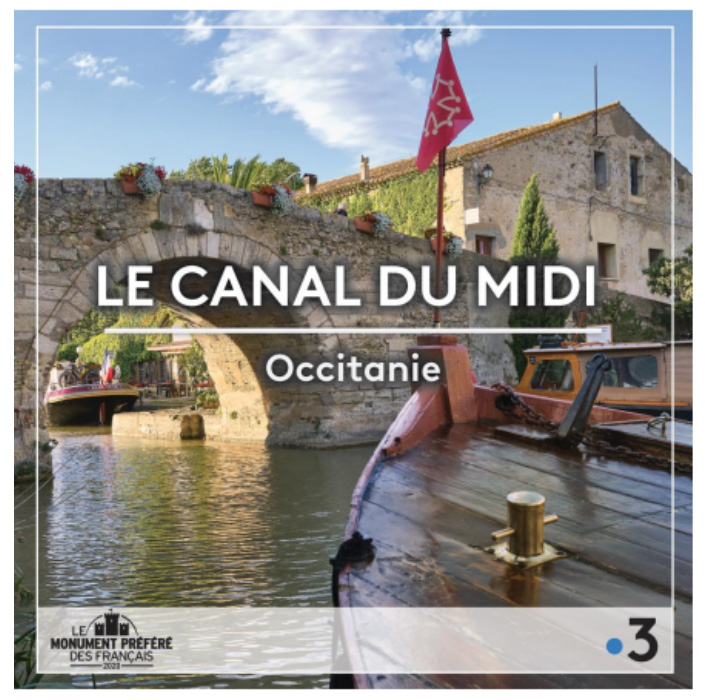 In 2020 "Le Monument Préfréré des Français" is a heritage programme in the heart of the territories, hosted by Stéphane Bern, now in its third edition.

The Canal du Midi has the privilege of representing the Occitan Region.

Stéphane Bern is back on the roads of Metropolitan France and Overseas, to discover these pure wonders that will be presented during a special broadcast on France 3.

It is a historical and touristic link that unites the whole of Occitania.

A 17th century masterpiece, born of the genius of Pierre-Paul Riquet, the Canal du Midi is also the Royal Canal of Languedoc at its creation - it has become a symbol for the whole Occitan region and crosses the departments : Haute Garonne , Tarn, Aude and Hérault.

Classified by UNESCO on December 7, 1996 on the prestigious list of World Heritage of Humanity, the French State, in 1997, inscribed it as a Site and many of its works are inscribed or classified as Historic Monuments.

From Toulouse to the Etang de Thau, the Canal du Midi, which runs for 240 km and has 65 locks, offers the Occitan region an incredible succession of architectural and landscape gems.

The landscape sequences are multiple and follow one another throughout the journey. From the rich cereal lands of the Lauragais, to the mineral foothills of the Corbières and the Minervois, to the cypress trees and umbrella pines of the Mediterranean, the Canal du Midi is home to the most beautiful structures: the threshold of Naurouze, the great basin of Castelnaudary, Carcassonne and its medieval city, the Somail, the tunnel of Malpas, the locks of Fonsérannes and the canal bridge of Béziers, the exceptional work of the Libron, Agde, ancient city and the entrance to the Etang de Thau.

In the Montagne Noire, Haute-Garonne, Aude and Tarn, visitors can discover the great dams of Saint-Ferréol (17th century) and Lampy (18th century) and their gullies which, as far as the Seuil de Naurouze, supply water to the Canal du Midi.

The backbone of Occitania, the Canal du Midi is also a formidable vector of tourist development in the heart of the territories it crosses.

With nearly 10,000 boat passages a year at the Argens lock, the Canal du Midi alone carries nearly 30% of the national traffic of French river tourism.

With more than 1.5 million visitors each year, tourism combining activities on and around the water is constantly developing.

Voies navigables de France is the manager of the canal, which is the property of the French State, and numerous public and private players are working together to enhance the value of this unique monument, notably the Occitan Region and the Departments crossed by the canal and its food system.

The Canal du Midi is a French navigation canal with a forebay that has linked Toulouse to the Mediterranean Sea since the 17th century.

From the 19th century, the Canal Latéral à la Garonne, which doubles the Garonne from Bordeaux to Toulouse, extended the Canal du Midi to provide a waterway from the Atlantic Ocean to the Mediterranean Sea, the whole of the two canals being called the "Canal des Deux-Mers".

An exceptional work of art, considered by its contemporaries as the largest construction site of the 17th century, the Canal du Midi revolutionized river transport and traffic in the South of France during the Ancien Régime.

The challenge, taken up by Pierre-Paul Riquet, its designer, was to transport water from the Black Mountain to the threshold of Naurouze, the canal's highest point.

Louis XIV authorized the start of the work by a royal edict of October 1666. Supervised by Pierre-Paul Riquet, the work lasted from 1666 to 1681, under the control of Jean-Baptiste Colbert.

The Missing Treasures of the Revolution