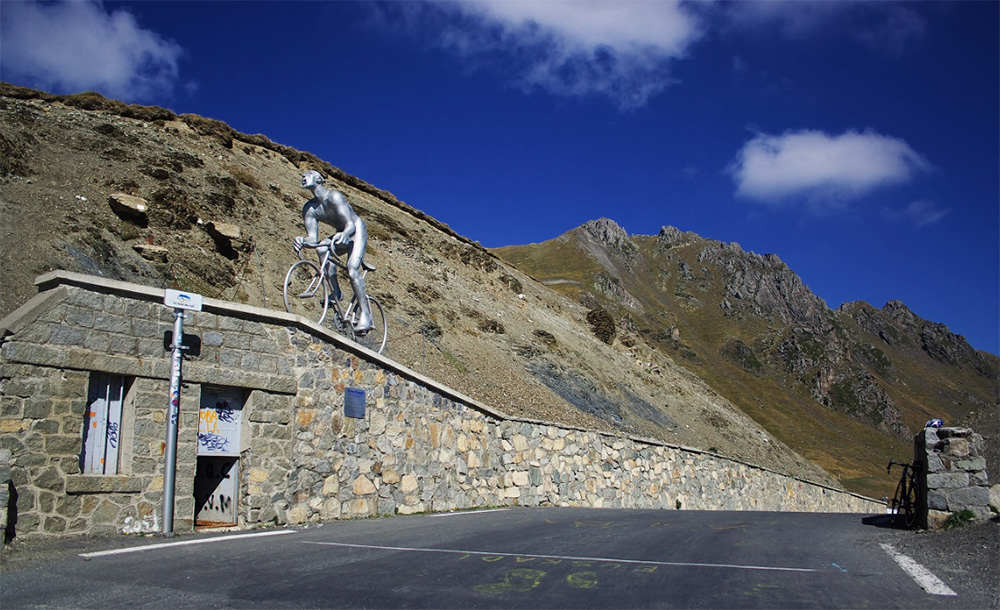 info_outline
You are here: Home / Regions / Occitany / 65-Hautes-Pyrénées / The return of the "Giant of the Tourmalet"

The return of the "Giant of the Tourmalet"

Every year in autumn the Giant descends into the valley and every spring the Giant rises to the top of the pass.

The Giant, frequently nicknamed Octave in homage to Octave Lapize, the first rider to cross the Col du Tourmalet on the Tour in 19101, is a monumental sculpture created by Jean-Bernard Métais and installed for part of the year at the top of the Col du Tourmalet in France.

The statue, which represents a runner as a dancer, is the 9th "Tour de France" sculpture in the Pyrenees.

The statue was inaugurated on June 26, 1999 in the presence of Bernard Hinault, Jean-François Pescheux and Jean-Marie Leblanc.

The crossing of the Pyrenees is the event of this 1910 Tour de France because it is the first time in history that the riders have to cross the Pyrenean passes.

The second Pyrenean stage between Luchon and Bayonne is even more difficult with the ascent of the main Pyrenean passes.

Octave Lapize takes the lead from the beginning of the stage and passes in front of the col de Peyresourde after 15 kilometers of climb together with Gustave Garrigou.

He passes alone in the lead at the top of the Col du Tourmalet having completed part of the ascent on foot, while Garrigou stayed on his bike from start to finish.

Lapize at the end of the climb in the Aubisque speaks to Charles Ravaud, a journalist from L'Auto representing the Tour director, Henri Desgrange, and tells him :

"You're criminals, you hear, criminals!

You don't ask men to make such an effort! You're all criminals".

In addition to this sculpture, there is a bust of Jacques Goddet, one of the directors of the Tour de France, as well as a plaque in memory of Jean-Raoul Paul who did a lot for the development of the Pyrenees.

The Museum of Hussars