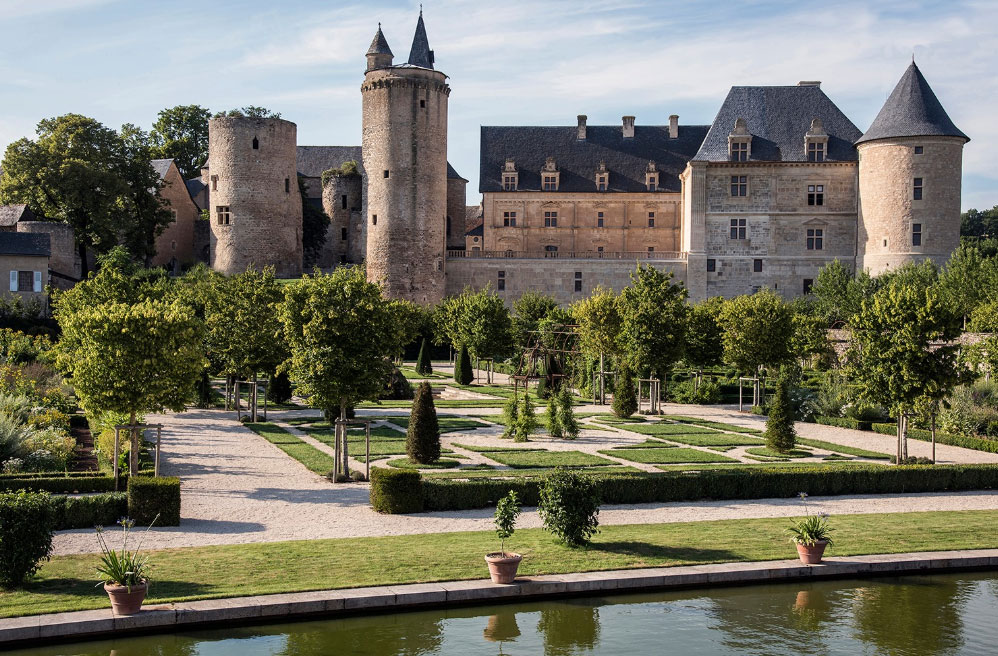 info_outline
You are here: Home / Regions / Occitany / 12-Aveyron / The castle of Bournazel, from the 16th century, a remarkable Renaissance castle

The castle of Bournazel, from the 16th century, a remarkable Renaissance castle

The castle of Bournazel is a renaissance castle located on the edge of the village of Bournazel, in the canton of Rignac in Aveyron.

Its current owners, who acquired the castle in 2007, have undertaken a restoration including the complete reconstruction of the wing which was burnt down in 1790, inspired by the wing of Fontainebleau. It has now been completed, as has the Renaissance-style corner tower, which gives the château back its original structure.

They begin the reconstruction of the monumental staircase overlooking the garden level.

At the time of the construction, the principals were Jean de Buisson, a rich financier who had become François I's man of war, and his wife Charlotte de Mancip, heiress of the estate.

The construction of the castle began with the north wing in the 1540s, on the site of the medieval dwelling on which the farmyard dwelling, the defence towers and the urban enclosure remained.

While Jean de Buisson took part in the 9th Italian War during which he distinguished himself at the battle of Cérisoles in 1544, his wife led the work.

The north wing was completed in 1545, on the return of Jean de Buisson, who was made a knight of the King's order at the end of the battle.

As a man of war he knew Galiot de Genouillac, Grand Master of the artillery of François I, who in the 1530s had the Château d'Assier built in the nearby Quercy region.

The building site was thus relaunched with the construction of the east wing. However, the initial project of a vast rectangular plan enclosing a regular courtyard of honour within it never saw the light of day, interrupted for unknown reasons, but which are perhaps to be linked to the religious unrest that shook this part of the province from 1561 onwards.

Thus only the north and east wings were built, as well as the staircase of honour in return.

The influence of Georges d'Armagnac, bishop of Rodez

One of the great figures of the Rouergue of the Renaissance is Georges d'Armagnac, bishop of Rodez from 1530 to less than 30 years old.

He was the chaplain to Marguerite de Navarre, the sister of François I. During his embassy in Venice, he was accompanied by his private secretary, Guillaume Philandier, author of annotations on the Treaty of Vitruvius.

A lover of ancient texts and sensitive to all the arts, it was through him that Serlio arrived at the court of Francis I.

The trip to Italy, the court's frequentation and the closeness of Philandrier, the erudite architect of Georges d'Armagnac, are no strangers to the magnificence of the castle.

In 1790, the castle experienced a tragic event.

During a peasant revolt against the taxes owed to the lord, the castle was looted to the point of window fuses and then burned.

Passed into the hands of the Count of Marigny in the nineteenth century, the castle was profoundly transformed.

The main staircase back from the east wing was destroyed, the adjacent tower was levelled and part of the east wing.

After the Second World War, the castle became a rest home managed by the Decazeville coalmines. The apartments were transformed into rooms, and the old volumes cut into small spaces for care and rest.

Since 2008, the new owners have decided to give this jewel of the Renaissance back its lustre by restoring the volumes and decorations of the 16th century.

As for the gardens of the castle, since January 2019, they are classified as Remarkable Gardens.