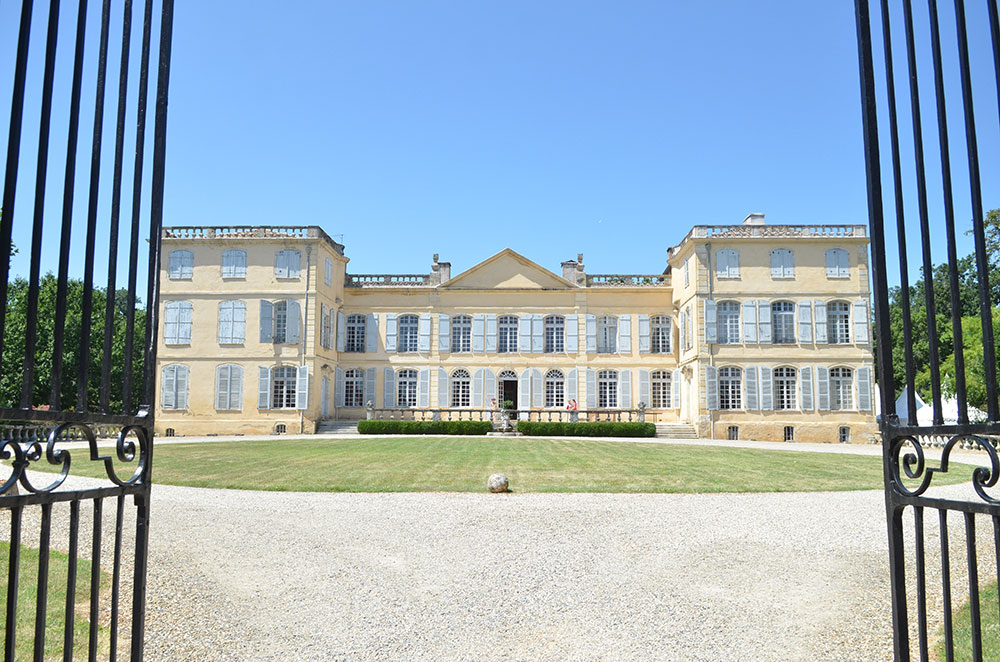 info_outline
You are here: Home / Regions / Occitany / 82-Tarn-et-Garonne / The castle of Lamotte-Bardigues, a family history for 700 years

The castle of Lamotte-Bardigues, a family history for 700 years

Taken over in July 2018 by a young couple from the 20th generation of owners, Paul Alexandre de Boisséson and his wife Caroline, the Château de Lamotte-Bardigues is today experiencing a certain revival with numerous development and restoration projects.

They left Paris to open this yacht house to the public and offer an evocation of the art of living in the 18th century in Tarn-et-Garonne and to make an agricultural estate pioneer of the ecological transition and a showcase for local products.

"Since our arrival, we have endeavoured to create and structure the projects necessary to guarantee the preservation of this ensemble. This involves architectural maintenance and restoration of certain damaged parts, the opening of the castle to visitors, effective since April 2019, and the development of this "museum" part, the organisation of cultural and artistic events, exhibitions, plays, etc., the preservation of our agricultural estate and the restoration and development of the Park around the castle," explains .Paul Alexandre de Boisséson.

"We are working hand in hand with local associations to launch different projects: notably in 2018, an association from Auvillar participated in the renovation of our Bread Oven, the recreation of a vegetable garden, a henhouse and an orchard at the château, the development of our beehives with a neighbouring beekeeper and the production of honey from the château, the handing over of vines and the production of wine, which was one of the great sources of income for the estate until the beginning of the 20th century. We are also considering a commercial project: the creation of a reception area, the restoration of our outbuildings and farms in order to create a lodging offer...".

First owned by the Goth family following the purchase in 1315 by Raymond Arnaud de Goth, the nephew of Pope Clement V, the first pope of Avignon, the fief then passed in 1625 by marriage to the d'Esparbes de Lussan. This great military family of Armagnac kept the Château de Lamotte-Bardigues until 1870 with the death of the last male descendant, Emmanuel d'Esparbes de Lussan, who died in Gravelotte while heroically facing the Prussians. The property is bequeathed to his sister Berthe de Saint-Exupéry who will have only one daughter, Jacqueline de Greling. The latter's daughter, Françoise de Greling, married the Marquis de Boisséson, the great-grandfather of the current owner, in 1922.

Built on a plateau 5km from the Garonne, the castle of Lamotte-Bardigues offers a panoramic view of the surrounding hilly landscape. This cadastral mound was chosen for its defensive position and gave its name to the place. Today the estate is composed of the castle and its outbuildings, a park, a 130-hectare agricultural estate cultivated organically, 75 hectares of woodland, four farms in various states, a mill, a Chappe telegraph tower and a recently restored bread oven.

The park of the Château de Lamotte-Bardigues is a reflection of the residence it adorns: elegant and authentic. It extends over five hectares and envelops the house in a natural and controlled green setting. It is composed of different spaces that retain their distinct characteristics and function. It is both complementary and coherent, where castle and garden are engaged in a play of mirrors and sublimate each other.

An example of a "field house" of a large Ancien Régime family, almost entirely preserved in its 18th century state, it has been classified as a Historic Monument since 1973. Inside, the decoration is refined, 18th century panelling and plasterwork, wallpaper, fireplaces, painted door tops, floors, terracotta tiles. But the very specific character of this house is to have also and especially preserved the totality of its collections of furniture, in particular armchairs and beds, as well as the numerous objects and personal effects of its occupants.

The castle of Lamotte-Bardigues and its gardens provide an exceptional setting for works of art and exhibitions. Every year artists bring the house, its walls and park to life with their own creations.

The castle's new shop offers a selection of local products: wine, honey, biscuits, jam, syrups, juices and herbal teas... in collaboration with these local craftsmen. There are also all sorts of pretty little things to remind you of your visit: products derived from the castle, games and books for children, postcards...

Friends of the castle

Creation of a Municipal Commission for Cepes in the capital of ...Cepes

label Gastronomy [to eat] Amazing... isn't it? cities and villages

The castle of the Queen Margot, miraculous castle