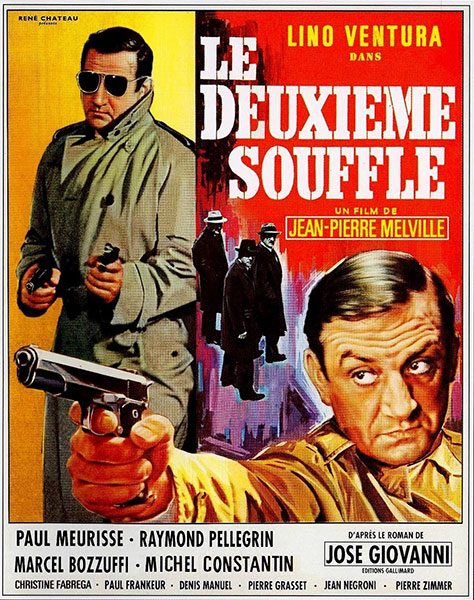 In the summer of 1966 Jean Pierre Melville shot "Le deuxième souffle" around Marseille, adapted from a novel by José Giovanni.

At the time, it was received with a great deal of critical acclaim.

Since then, Alain Corneau has made a new adaptation of it, which was released in 2007.

At the same time, a settling of scores liquidates Jacques, with whom Gu's girlfriend Manouche had "hooked up", without his inner loyalty suffering.

Superintendent Blot gets involved in the case. The Ricci brothers, Jo and Paul, one in Paris, the other in Marseille, seem to be involved.

Gu arrives just in time to get Manouche out of the clutches of Jo's men, whom he liquidates in a way that does not deceive Superintendent Blot.

Forced to "hide", Gu gnaws at his brakes, then retreats to Marseilles where Manouche has prepared a vacation for him.

Just at that moment, Paul Ricci prepares the attack on a bank van, a move for which he needs a partner.

A man named Orloff recuses himself, but tells Gu, who needs a makeover, and whose honor forbids him to live off Manouche.

The coup succeeds. Sometimes in Marseilles, sometimes in Paris, Blot calmly follows the trail, arresting Gu while feigning a fabricated settling of scores.

Gu falls into the trap.

Wanting to justify himself, his words, recorded without his knowledge by the police, seem to betray Paul. But Gu wants to clear his honor: he escapes again and will have time to kill Jo, who had "double-crossed" everyone, before being himself shot by the police.

Actor Mel Ferrer was to play the role of Orloff, but Melville didn't think it was a good role and managed to get Ferrer to leave the set after the first scene, and replaced him with Pierre Zimmer.

When Manouche goes up the stairs to have dinner with Gu in Montrouge, one can hear a dialogue of Jean-Pierre Melville's "Enfants terribles" escaping from an apartment.

The scenes of the robbery of the van take place on the Route des Crêtes, located on the heights of the Soubeyranes Cliffs between the communes of La Ciotat and Cassis.

The scene where Gu gets on the train is at the origin of the quarrel between Lino Ventura and Jean-Pierre Melville, the latter having secretly asked the engineer to gradually increase the speed of the train.