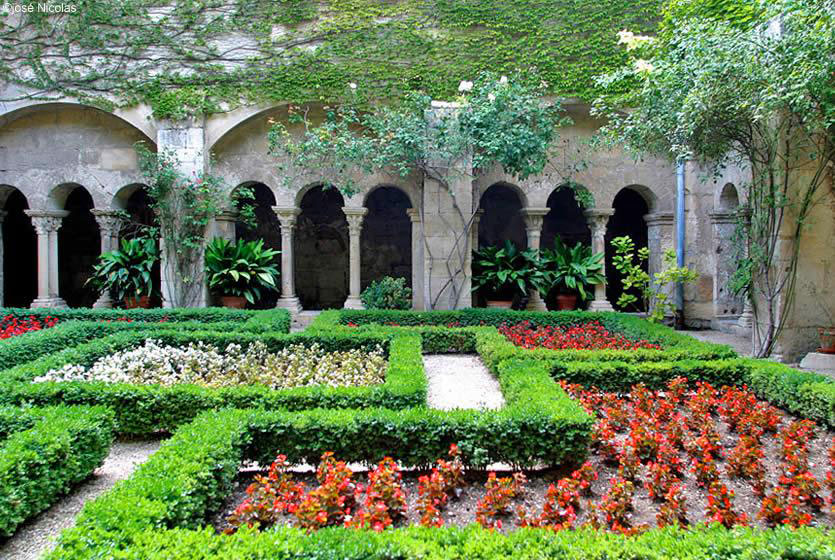 info_outline
You are here: Home / Regions / Provence Alpes Côtes d'Azur / 13-Bouches-du-Rhône / The Monastery of Saint Paul de Mausole, a masterpiece of Romanesque art, inspired by the work of Van Gogh

A true masterpiece of Provençal Romanesque art, the monastery of Saint-Paul is located very close to the Gallo-Roman city of Glanum and owes its name "Mausole" to the proximity of the mausoleum of the "Julii".

From the outside, the beautiful two-storey Romanesque bell tower with a square plan and pyramidal roof is striking.

Inside is its magnificent 11th and 12th century Romanesque cloister. Around the walkway is a delicately maintained garden that gives the stone its full grandeur.

The monastery is also famous for having welcomed and inspired Vincent Van Gogh who stayed there from 3 May 1889 to 16 May 1890, and painted a large number of canvases.

Saint-Paul de Mausole is today a health establishment with a psychiatric vocation.

In the former chapter rooms and the restored Romanesque staircase, visitors can discover a permanent exhibition and sale of the patients' works created at the Valetudo art therapy workshop.

From the top of the staircase, one can see the panorama of the wheat field that Vincent Van Gogh contemplated from his window and painted during his year of internment in the men's pavilion.

Upstairs, a room retraces the history of the Saint-Paul de Mausole House of Health. Then on the right is the reconstruction of the room where Van Gogh was interned.

Opposite, a room explains psychiatry in the 19th century.

A bit of history and... Van Gogh

In Gallo-Roman times, a spring attracted pilgrims to Saint-Rémy de Provence who came to invoke Valetudo, the goddess of health. In the 11th century, Christians built a priory near the spring, a real jewel of Provençal Romanesque art. Wonderfully preserved, it adjoins the Saint-Paul de Mausole health centre, where Vincent Van Gogh was welcomed after the episode of the severed ear.

Near his room, around the cloister's promenade, an art therapy workshop has been created by the Valetudo association, which combines art, research and care.

Vincent Van Gogh arrived in Saint-Rémy de Provence on 8 May 1889, from Arles, to be "interned" according to his wishes at the Asile Saint-Paul de Mausole. Fascinated by the quality of the light and the beauty of the landscapes, very inspired, happy and relieved to find a serene and understanding atmosphere with the nuns and the nursing staff who welcomed him, he produced 143 oil paintings and more than 100 drawings in the space of 53 weeks.

This period in Saint Remo is considered to be a major period in Van Gogh's work.

Visits to places open to the public are subject to respect for the peace and quiet of the site.