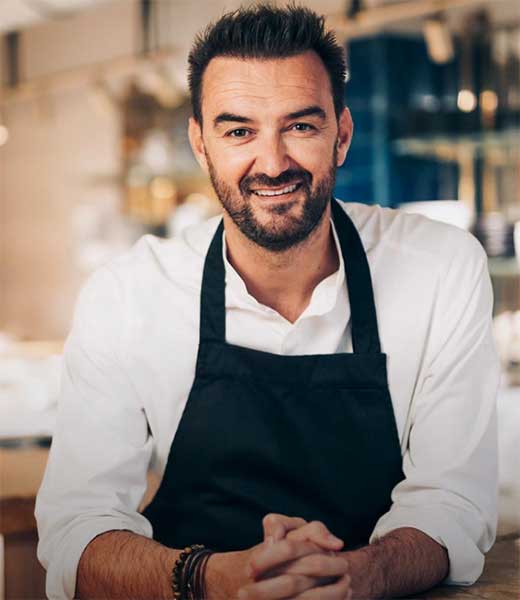 Cyril Lignac is a French pastry chef and chef, born on 5 November 1977 in Rodez.

Like many others from Aveyron and Auvergne, he also travelled to Paris.

After his apprenticeship at the Saint-Joseph Hotel School in Villefranche-de-Rouergue, during which he worked for Nicole Fagegaltier, Cyril Lignac joined the brigade of chef Alain Passard at "L'Arpège" in Paris in 2000, and continued his training in 20015 with chefs Jacques and Laurent Pourcel at the "Jardin des Sen "s and at "La Maison Blanche" in Montpellier.

In 2002, he joined Pierre Hermé's pastry shop, then became sous-chef in pastry at the restaurant La Grande Cascade, in the Bois de Boulogne, with chef Alain Ducasse.

In 2005, he opened his gastronomic restaurant "Le Quinzième" in Paris and, on this occasion, allowed the channel M6 to follow the creation and opening of his establishment in the programme Oui Chef!

In 2008, he took over the bistro "Le Chardenoux", listed as a historical monument.

In 2010, he opened the "Cuisine Attitude" workshop and in 2011, he opened a new restaurant, the "Claude Sainlouis", which he renamed "Aux Prés". In the same year, he opens with Benoît Couvrand "La Pâtisserie Cyril Lignac" in Paris 11th.

On 27 February 2012, his restaurant "Le Quinzième" received its first star in the Michelin Guide.

It will close its doors after 15 years of operation.

In 2017, he opens a new boutique "La Pâtisserie" in the 17th arrondissement, in the heart of the Poncelet market.

He is also a presenter in numerous culinary programmes on the M6 channel and has published recipe books mainly with Hachette Pratique and Editions de La Martinière.