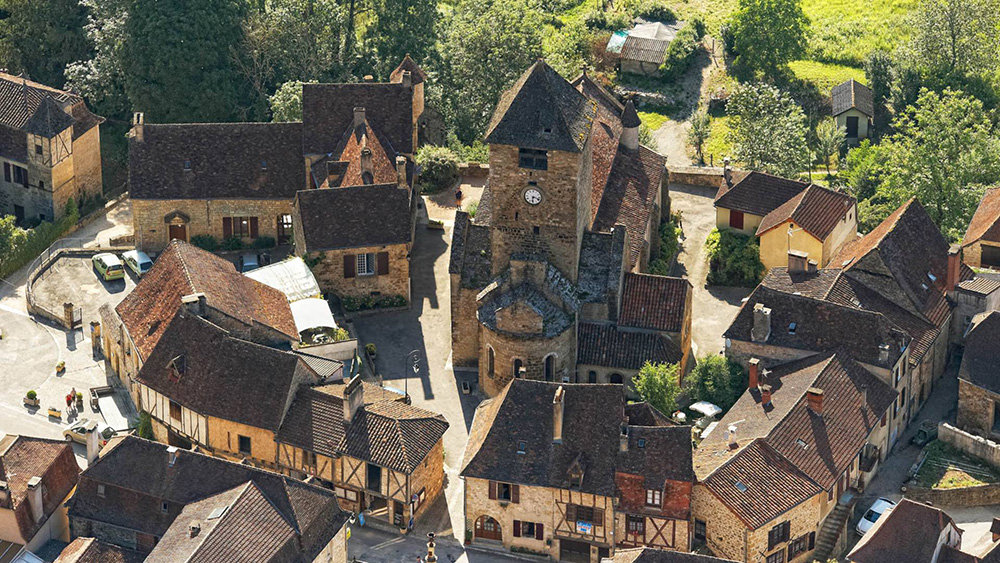 Formerly a holiday resort appreciated by the notables of Saint-Céré, the village was nicknamed the "Little Versailles".

Classified among the "Most Beautiful Villages of France" Autoire, on the edge of the Causse de Gramat, offers sloping roofs with dark tiles, blond half-timbered or corbelled facades, turrets and dovecotes, manors, castles and manor houses...

First of all you have to go to the highest waterfall of the department, this impressive waterfall of more than 30m is protected as a classified site.

Another curiosity, the castle of the English, an astonishing medieval construction leaning against the limestone cliff and which make, for a long time, a mark of brigands.

On the small square in the center of the village, there is a fountain decorated with bronze dolphins dating from 1860 and erected thanks to a public subscription. The dolphin motif has been a popular decorative element since the Renaissance, often associated with the presence of water.

The Peyrusse de Banze seigniorial castle, built in the 13th century on the site of the former Castrum and rebuilt after the Hundred Years' War, was converted in the 19th century into a town hall-school. It now houses the village hall. One can still see on the main facade beautiful openings in pointed or mullioned arch and a curious watchtower.

In the main street, a series of medieval houses, most of them dating from after the Hundred Years War, built in half-timbered and corbelled construction, the floor that advances onto the street resting on wooden corbels, is worth a visit. The first floor was very often used for commerce and handicrafts, hence the large openings overlooking the street.

The church of Saint-Pierre and Saint-Paul, in the center of the fortified village, was rebuilt at the end of the 11th and beginning of the 12th century, following the donation made to the bishopric of Cahors by the lords of Banze. It was fortified towards the end of the Hundred Years' War, and the bell tower was raised. Capped by a dome, the Romanesque building presents an important carved decoration. One can see above the main entrance a sketch of the coat of arms of the de Banze family and a cross of Languedoc, symbol of the county of Toulouse.

The Manoir de Colomb (private) probably dates from the end of the 17th century. Mansard-style roof, dormer windows with triangular pediment and finials with balls affirm the wealth of the owners. Among the personalities who lived in this manor, the Knight of Columbus, bodyguard of King Louis XVI in 1777, and his son General Louis de Colombus, who fought against the Prussian army and contributed to the fame of North Africa. He was honored after his death by the designation of a city in Algeria, Colomb-Béchar.

"The little story says that we owe the creation of the "Malakoff", an emblematic dessert of Autoire, to the aide-de-camp of General Colombus during the capture of the citadel of the same name in 1855, during the battle of Crimea. The "Malakoff d'Autoire" is a floating island whose snow-whites are cooked by caramel poured over them (the aide-de-camp ran out of milk to cook them...), which gives soft, slightly sweet whites with a hint of bitterness and the color of caramel ".

The Castle of Limargue (private). Simple residence at the beginning, it was the subject of additions when Sieur Lafon was made Knight by King Charles VIII, and thus obtained the right to build towers and machicolations. The door at the bottom of the tower is adorned with a toric arch carved as an embrace, typical of the end of the 15th century. The second tower, more imposing, was used as a defensive tower.

The Manoir Laroque-Delprat (private). Property of a bourgeois family since 1605 (judges, notaries, lawyers...), it has all the characteristics of the 17th century: L-shaped plan articulated around a stairwell, large windows, pediment dormer windows topped with balls. Its particularity lies in a flat painted ceiling, recently listed in the supplementary inventory of historical monuments.

The Château de Busqueilles (private). A 17th century building, which has been redesigned and updated at the end of the 18th century, it houses a very pretty dovecote with a slate roof, characteristic of the Haut Quercy region.

The Saint-Roch Chapel, covered with a broken barrel vault and limestone slate, it is decorated with mural paintings of the 15th century, very degraded. Saint-Roch was the patron saint of the pestiférés, and at the beginning of the 20th century people came here to bless the herds.

After the bridge, a large medieval mansion on the left, and continuing on to the Taillefer wash house and then the Roque-Maynard Castle (private), the only castle built on the left bank of the Autoire brook. This beautiful residence with a pepperpot belonged to the poet François Maynard (1582 - 1646) who took refuge there during the plague epidemic that ravaged the region.

Continuing on we arrive at the place called "Segonzac" where a statue of the Virgin and Child "Notre Dame des Champs" was installed in 1896 by a mission charged with restoring the religious practice of the parish. It was also intended to protect the vines, victims of diseases during the 19th century, and all the slopes of Autoire were covered.

The heritage and hidden treasures of Autoire

To be discovered in several ways

The " Let yourself be told " tour of the Land of Art and History
For sale 0,50 € in the offices of the Tourist Office of the Dordogne Valley in Carennac and Saint-Céré
Guided tours of the Land of Art and History
Discovery tours and visits: explore all facets of heritage in the company of experts
Visits to the lanterns: at night, discover another face of the heritage
Playful visits: mime puzzles, treasure hunt... a fun way to discover the village.

The Devil is in the Pont Valentré...

No matter the perfume ... Pivaudran provides the packaging