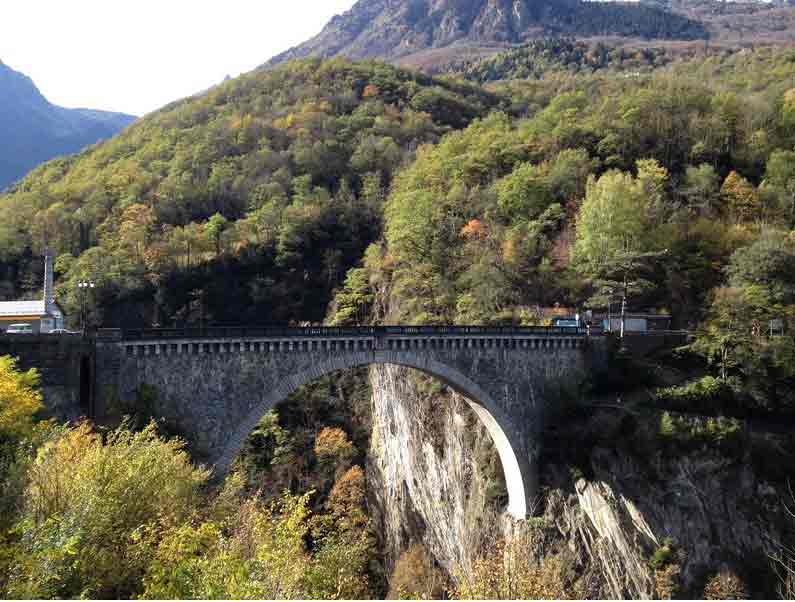 The memory of Napoleon III and Victor Hugo's drawing

Napoleon III, who fell in love with the Pyrenees, made several spa stays in the company of Empress Eugenie.

His great work in Saint-Sauveur was the realization of an idea that was dear to him: to link, by means of a bridge, the two banks of the Gave de Gavarnie.

The work will last two years and will be completed in June 1861. The bridge deck is 68 m long and is located 63 m above the Gave.

The vault rests directly on the steep rocks that line the Gave.

The bridge will be delivered to traffic in 1861 and Napoleon III will return to contemplate it in September 1863.

The Solferino Chapel was also rebuilt in 1859 on the orders of Emperor Napoleon III, on the ruins of the ancient St. Peter's Chapel .

The construction of the latter dates back to the times when Saint James was evangelizing the North of Spain.

For a long time, the priest blessed the flocks of sheep on their way to the high mountain pastures.

A column will be erected in honour of the Emperor.

The legend of the Solferino Chapel

A legend runs near the chapel.

A long time ago, a bandit lived in the castle above Luz. He killed and murdered and kept no prisoners to feed.

Only one of his victims was saved, Mary, a beautiful young girl from Arcizans, whom the evil man wanted to take as his wife and whom he held prisoner to the great displeasure of his lover.

The Virgin appeared to the young girl who was freed from the tyrant, carried up to heaven by a soft white light. Peter, who wanted to attack the castle with a slingshot, was inconsolable.

He withdrew as a hermit to the hill where the Solferino Chapel now stands and which for a long time was called St. Peter's Hermitage.

The Chapel of the Knights Templar

The primitive church was built at the end of the 11th century by the family of Saint Andrew and not by the Templars.

It is dedicated to the apostle of that name. In the 14th century, the descendants of the family of Saint Andrew gave the church to the "Hospitallers of Saint John of Jerusalem", who had two hospices, one in Gavarnie and another in Héas.

They welcomed pilgrims on their way to Santiago de Compostela. This right was exercised by the Hospitallers until the revolution of 1789.

These Hospitallers later became "Knights of Malta". As soon as they arrived, they raised the Church and surrounded it with ramparts to protect themselves from the Aragonese bandits, "Les Miquelets".

The castle was built in the 11th century by the Count of Montblanc, Lord of Bigorre, to watch over the brigands from Spain or Barèges.

Only two towers remain of the castle (a round and a square) with between them a wall linking them, called curtain wall. In front of the castle there used to be a chapel called the priory of Sainte-Marie, hence the name of the castle.

Around 1800, the chapel of the castle was in ruins and was destroyed. Around 1880-90, the Fabas ladies, owners of the castle, had a niche built and placed a statue of Our Lady of the Miraculous Medal. The statue was destroyed around 1980 by young people from a summer camp.

Victor Hugo himself visited the castle in 1843. Fallen under the spell of the building, he even made a drawing of it!

"The Pact of the Wolves" in the Pyrenees