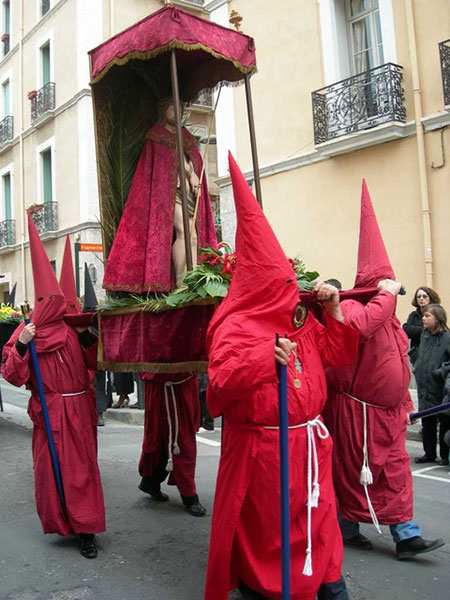 info_outline
You are here: Home / Regions / Occitany / 66-Pyrénées-Orientales / The Sanch Procession, an amazing and colorful procession

For the uninitiated, the first aspect of the Sanch procession looks more like a strange folk festival than a religious ceremony, and yet ...

The procession of the Sanch has taken place every Good Friday since 1461.

Each processionary alone carries between 30 and 50 kg during the few hours that the ceremony lasts.

This weight is that of the "Mistéris", life-size representations of the scenes of the passion of Christ.

They are carried by 4 to 8 men whose dress is invariably the same: long dress and pointed hood, called "Caparutxa", all in black or bright red. The scenes pass for several hours through the narrow streets of the villages so that they can be seen by everyone, even people who cannot move around.

In the Middle Ages, each brotherhood organized its own procession in the village where it practiced. Thus several parades were organized in each village. Little by little, the brotherhoods grouped together so as to organize only one ceremony.

Originally, the processions were organized to ward off the plagues, wars and other misfortunes that were raining down on Europe at the time. Over the centuries the procession was banned several times by the Church, but it has always survived.

At the beginning of the XXth century it declined in the villages, being organized only in Perpignan until its total disappearance.

Faced with the dechristianization the Church changed its mind and nowadays a procession is organized in Perpignan, but also in Arles sur Tech, in a more stripped down style, in Collioure, more touristic, in Girona, Spain, more spectacular.

The Caperutxa: This is the conical cap, but by extension we call the whole outfit. It is black for the penitent and red for the regidor. The regidor symbolizes the man condemned to death whom the confreres accompany to the gallows. In the 18th century the tail of the Caperutxa was slid under the arm or under the cord of the belt. Some rich penitents had their servants carry the tail!

The Scapular: devotional object formed by two pieces of blessed felt joined by a ribbon. The scapular is tied around the neck and is worn under the penitent's bag. Blessed by the bishop, it symbolizes membership in the brotherhood of the Sanch.

The Cordelière: cord serving as a belt that used to catch the train. Its color distinguishes the penitent's original parish, red being for Saint-Jacques, white for la Réal, green and red for Saint-Joseph, green for the Holy Thorns of Saint-Matthieu and blue and red for Saint-Estève and Saint-Laurent de la Salanque.

Shoes are black, but some penitents do the procession barefoot.