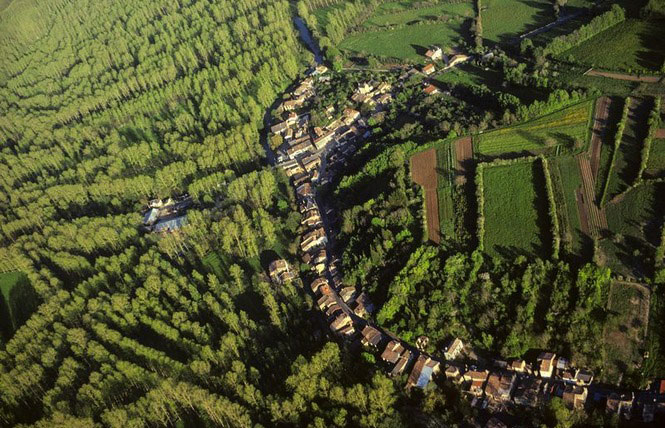 The commune is composed of two villages inhabited since prehistoric times, Sansais perched on a hillside and La Garette clinging to the side of a hillock 31 m. high, in the heart of the Marais Poitevin

A bit of history

Henri III of Navarre, future Henri IV, during a stay in Mursay in 1576, hunted and fished in La Garette. Ten years later, back in the Marais Poitevin, he wrote "Among these deserts are a thousand gardens where one goes only by boat ... Of fish, it is a monstrosity that the quantity, size and price ... ".

Classified for the most part, La Garette, from the French guéret meaning fallow land, is a village-street built between the hillside and the marshes, between the port Jaguin and the port of the Old Inn called Grand Port.

Until the middle of the 19th century, the latter was an important transit port for goods between the Bas-Poitou in the north and the Saintonge in the south.

In 1995, within the framework of the Opération Grand Site, the rue des Gravées, the main artery located between the hillside and the water, was entirely restored with the implantation of a herbarium in its soil. La Garette is an ideal starting point to discover the wet marsh on foot, by boat, by bike or on horseback.

Many sights to see

In Sansais, you must visit the Saint-Vincent church from the 19th century, the town hall-school from the 19th century, the windmills at La Grande Versenne and at Champ du Moulin, two wash houses at the communal pond
(a large one with an inverted tin roof so that the rainwater flows into a smaller one under the open sky, then into a ditch extending into the meadow - restoration project of one of them).

At the Garette, one must see the economic and tourist area of the Interregional Park of the Marais Poitevin set up in the old sawmill, platform for the Association of the breeders by boat of the Green Venice
and picnic and relaxation areas, the Maison du Cheval, the tourist complex of Sansais-La Garette, the impasse des fours (three private bread ovens, two of which can be seen from the street), the Chail dam with a boat pass, the educational trail with 30 panels describing the flora and fauna of the Marais Poitevin on an 800-meter circuit, with the possibility of connecting to the Internet with a cell phone thanks to the terminals on the display stands.

The Castle of Saint-Mesmin, a living medieval fortress