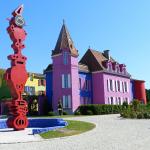 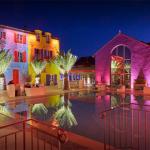 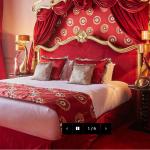 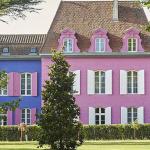 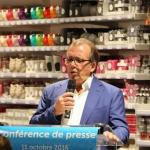 The Stelsia, the astonishing castle of Mr. GIFI

The Stelsia, a castle like no other, a unique and atypical place, the work of the boss of the Gifi group, the Lot-et-Garonnais Philippe Ginestet, who has made the former Château Lalande an exceptional address where luxury is expressed in a fairytale of colors, futuristic sculptures and a green setting of several hectares.

Located in the Lot valley, about thirty kilometers from Agen, this sumptuous complex includes a hotel with 32 unique rooms and a gourmet restaurant.

On 4700 m2 of land, this exceptional 18-hole course is the largest miniature golf course in Europe. The course takes you through giant animal-shaped topiaries, magical waterfalls and a vegetal maze.

Coming soon the largest karting circuit in Europe and a new hotel.

But who is Philippe Ginestet?

"GiFi" are the first two syllables, or almost, of the name and surname of a southerner from Lot-et-Garonne: Philippe Ginestet!

The adventure begins in Villeneuve-sur-Lot.

It is here that one of the empires of the distribution of products at low prices for the home and the family will be born.

In 1981, Philippe Ginestet opens a first point of sale in Villeneuve on the concept of "Gifi le vrai soldeur".

The concept evolves, from the sale to the first price.

In 1988, Gifi creates its central buying office and starts sourcing in Asian countries.

The brand is now present in nearly 500 stores, mainly in France and Belgium, as well as a few commercial establishments in Spain, Italy and Morocco.

The slogan of Gifi is from now on " Gifi des idées de Génie ! ».

Since 1988, Philippe Ginestet has been president and CEO of the company and works with his family.

A 2011 ranking by the economic magazine Challenges places Philippe Ginestet and his family in 107th place among French fortunes.

True to its roots in the Southwest, the company is still based in Villeneuve-sur-Lot, proof that you can conquer the world without necessarily being in Paris.

Philippe Ginestet, the creator of the Gifi stores, already owns several casinos. Three other casinos in the Aude and Pyrénées-Orientales would be in his sights.

Property since 2012 of the French Casino Company, the casino of Collioure should change hands. The gaming establishment is in the sights of Casimigi, a company belonging to Philippe Ginestet's group. But also Tati or Besson stores.

Philippe Ginestet started operating casinos in 2018 in Mimizan. Since then, Casimigi has taken over the casinos in Megève and Granville.

Philippe Ginestet is actually targeting a batch of three entities: Collioure, but also Gruissan and Port-la-Nouvelle. The takeover would be almost complete.

These three casinos of the French Casino Company were also of interest to the Belgian company Circus, notably owner of the games in Leucate. But, the sanitary crisis has, it seems, shaken the game to the advantage of Philippe Ginestet's group, which continues to operate in the gaming sector despite the sanitary closures imposed by the government.