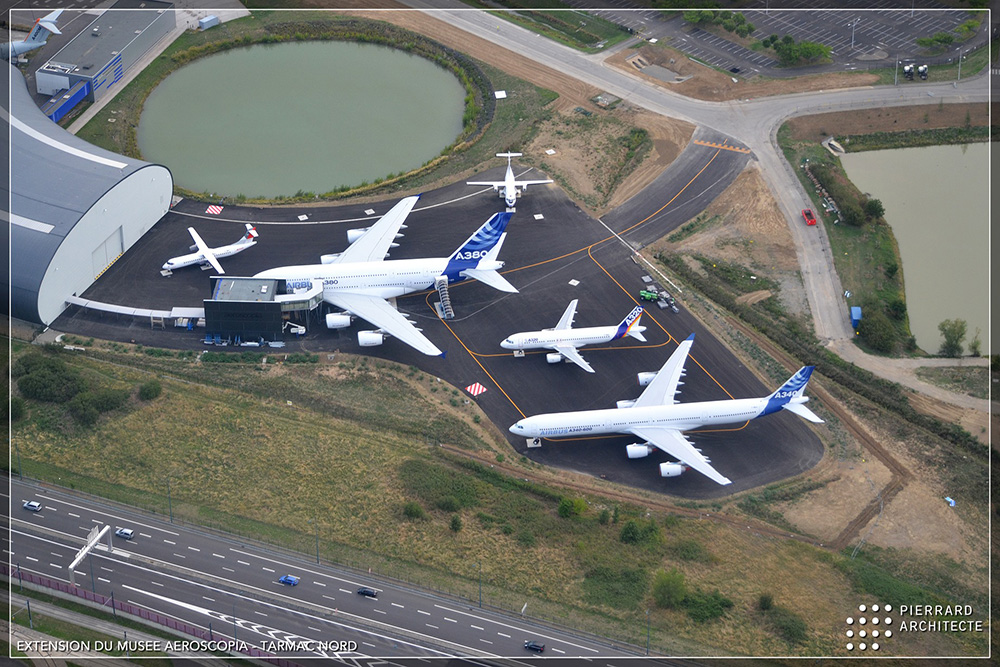 info_outline
You are here: Home / Regions / Occitany / 31-Haute-Garonne / Aeroscopia, the aviation museum with the A 380

Aeroscopia, the aviation museum with the A 380

Blagnac is not just Toulouse airport, it is also a good part of the Airbus factories and the Aviation Museum, "Aeroscopia", the first stone of which was laid on 16 June 2011.

This museum is being built on the Pinot site, on the edge of the Aeroconstellation Joint Development Zone (ZAC), the cradle of the A380, itself directly linked to the Toulouse-Blagnac airport platform and runways.

This location allows the museum's entrance to be shared with that of the A380 assembly line and Airbus factory tours, strengthening the site's industrial and cultural tourist offer.

Designed by Cardete Huet Architects, who also designed the geometry of the Lagardère factory, Aeroscopia's architecture displays the oblong shape of a long tube, covered with a grey zinc skin, open to daylight which, if it were not slightly curved along the plane in which it is reflected, would appear ready for immediate take-off.

The museum covers a floor area of 15,000 m², including indoor and outdoor exhibition spaces.

The hall allows a certain flexibility in terms of layout over time, with the possibility of a 6,500 m² extension to enrich the collections.

Aeroscopia presents more than 30 aircraft, featuring two Concorde aircraft that were born just a few hundred metres from the museum.

On March 14, 2020, the general public was given the starting signal to visit the only A380 in the world to be fitted out.

The giant stands alongside an A340-600, the world's longest commercial aircraft (75.30 metres), two ATR aircraft and an A320, the one inaugurated in 1987 by Prince Charles and Lady Di.

Aeroscopia is also a space for exhibitions and events. Until January 2019, it was Tintin who was in the spotlight.

A unique exhibition about Tintin and his aircrafts

Written in the golden age of aviation, Tintin's Adventures are imbued with the dynamism of the aeronautical industry.

Hergé, their author, passionate about aviation, offers a central role to planes in the adventures of his hero, who often travels by air, even flying himself.

More than fifty models of aircraft allow the famous reporter to criss-cross the planet!

The Pinot Farm, built in the 18th century. U-shaped, it is part of the museum project.
After rehabilitation, it will house several museum-related activities on 2,300 m²:

A 150-seat "Sky-Trotter" restaurant.
An amphitheatre with 64 seats, including 3 places for the disabled.
Two meeting rooms of 40 to 50 square metres