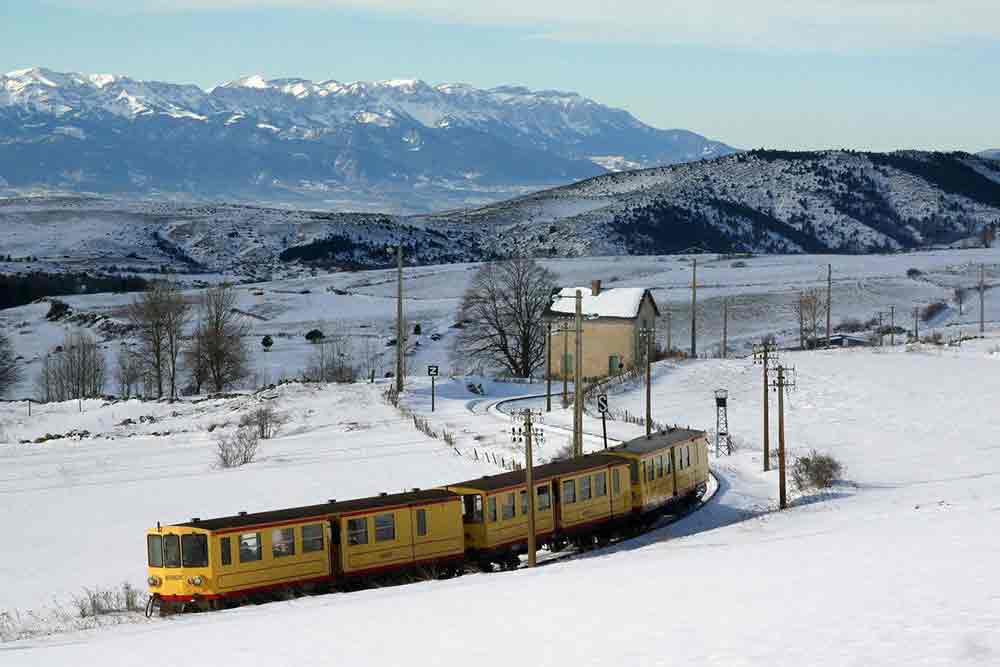 info_outline
You are here: Home / Regions / Occitany / 66-Pyrénées-Orientales / The Little Yellow Train is on first-name terms with the stars...

The Little Yellow Train is on first-name terms with the stars...

Built at the beginning of the century, the Yellow Train railway line was designed to link the Catalan high plateaux with the rest of the department. The first works undertaken in 1903 made it possible, as early as 1910, to link Villefranche-de-Conflent to Mont-Louis, the final line not being completed until 1927, when it reached Latour-de-Carol.

The little yellow train of Cerdanya "runs" over 63 km, at an altitude of 1592 m, making it the highest electrified line in Europe.

Embark on a fascinating journey through the Pyrenees!

This tourist line, now jointly operated by the SNCF and the Languedoc-Roussillon Regional Council, has required the construction of 650 engineering structures, including 19 tunnels, including the 337m long Planes tunnel, the 380m long Pla de Llaura not far from Ur and numerous bridges, including two remarkable ones : the Viaduct Séjourné (suspended 65m above the ground) and the Pont Gisclard (80m above a precipice), to allow the Yellow Train of the Pyrenees to play with the relief.
The line operates all year round, serving 22 stations including Bolqueire, the highest point of the line (1592 m).

The train is powered by an electric traction system. Electricity is provided by the ≪ third rail ≫, a side rail to the track.

The Bouillouses dam and the hydroelectric plant at La Cassagne, between Fontpedrouse and Mont-Louis, were built and commissioned in 1910 to enable the electrification of the Yellow Train.

The La Cassagne production complex is operated by SHEM, Société Hydroélectrique du Midi, a subsidiary of the SNCF created in 1937.

SHEM, which produces energy for the Yellow Train, is today under the control of ELECTRABEL (SUEZ Group).

The complex comprises nine plants, seven of which are located on the river Têt.

The water, drawn from the valleys, is conveyed to the production sites by large pipes visible from the train's route. The energy produced is surplus to the canary's needs only, the surplus is sold to EDF.

The yellow train, with its Catalan colours, Blood and Gold, also called "Canary", welcomes tens of thousands of tourists every year and allows them to cross the Cerdanya at an average speed of 30km/hour.