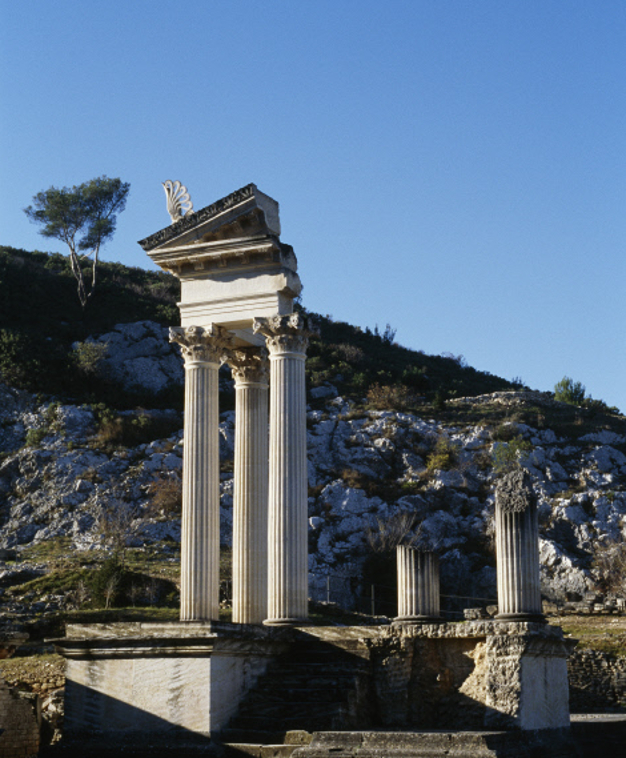 The Ancient City of Glanum updated

On the site of Glanum, the first traces of inhabitants date back to 2500 years before our era but the first Gallic tribes did not settle until about 600 years before Christ. They settled at the bottom of a valley on the northern side of the Alpilles mountains around an important spring that had been used since prehistoric times.

In the 2nd century B.C., the Salyans of Celto-Ligurian origin built a prosperous city around the sacred healing spring, impregnated with Hellenism by the Greeks (Phocaeans) who had moved inland from Marseille.

The Romans could not but be attracted by the importance of Glanum, from the name of the Gallic god Glan. At the beginning of our era, the site became the Oppidum Latinum, and during the imperial period, it was equipped with numerous monuments, forums, temples, baths, and show buildings, but it remained above all a religious sanctuary around its sacred spring. Glanum knew its apogee under the first Roman emperor Augustus.

Glanum did not resist the barbarian invasions and was completely destroyed around 260.

The survivors then abandoned Glanum for the small neighboring town located in the plain, less than a kilometer to the north, which became Saint-Remy de Provence.

The first excavations to uncover the city of Glanum date back to 1921 and were carried out by Pierre de Brun, then by Henri Rolland.

We can still see the large monuments, along a central street, which characterize the cities of Imperial Rome.

The upper part is narrower and is dedicated to the Sanctuary around the Sacred Spring with its small temples including those dedicated to the goddess of health Valetudo and to Hercules. In the middle area there is the monumental center with a basilica, the Forum, the Curia and the temples. The visit continues by the residential district including the thermal baths, rich villas of which the House of the Antes and the House of Cybele and Attis and shops. Only a small part of the city has been discovered. The site, managed by the Monuments Nationaux, is still being excavated by the Institut de Recherche sur l'Architecture Antique.