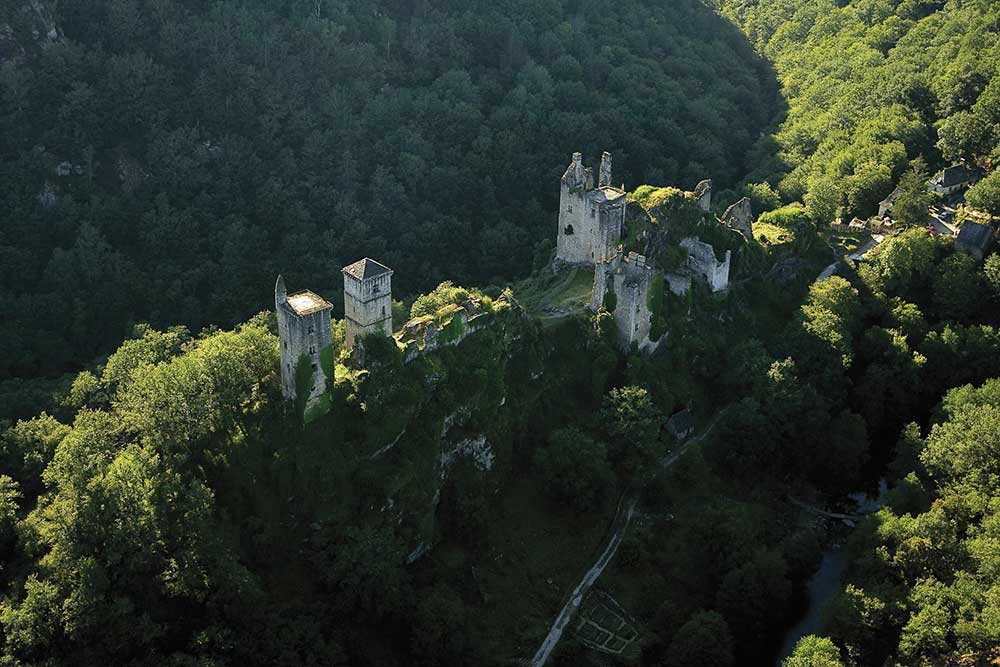 Situated in the middle of forests and deep gorges, built on a 40m high and 200m long rocky spur, overlooking the Maronne river, the city of Merle is a spectacular feudal complex of seven towers erected between the 11th and 15th centuries, each of which belonged to a different lord, the lords of Merle, Veyrac, Pesteils, Carbonnières, Noailles, Saint Bauzile, d'Alboy?

The perched and naturally defensible character of the rocky site contributed to the development of a "castrum" which lasted until the 15th century and which was situated on the border between the Duchy of Aquitaine, the County of Auvergne, the County of Toulouse and two dioceses.

In 1475, when the Hundred Years' War was over, a long period of peace allowed the blossoming of an era of prosperity for this small city. Alas, the religious wars were going to cause deadly devastation.

Today, one can discover in a park of 10 ha the castrum and its viewpoints, a reconstructed peasant farm, the ruins of a medieval village, the Maison Madège with a model representing the site, the Maison Esturgie, the last inhabited house, archaeological objects, medieval gardens, the souvenir shop...

The site has been classified as a Historic Monument since 1927, and is part of its landscape, located in a Natura 2000 zone and an area of ecological interest for flora and fauna.

Finally, there is a rumour that a treasure has been amassed in a cave of which we have lost track.

During the holidays, many "Naturally Medieval" activities are offered and included in the entrance fee.

The castle of Val