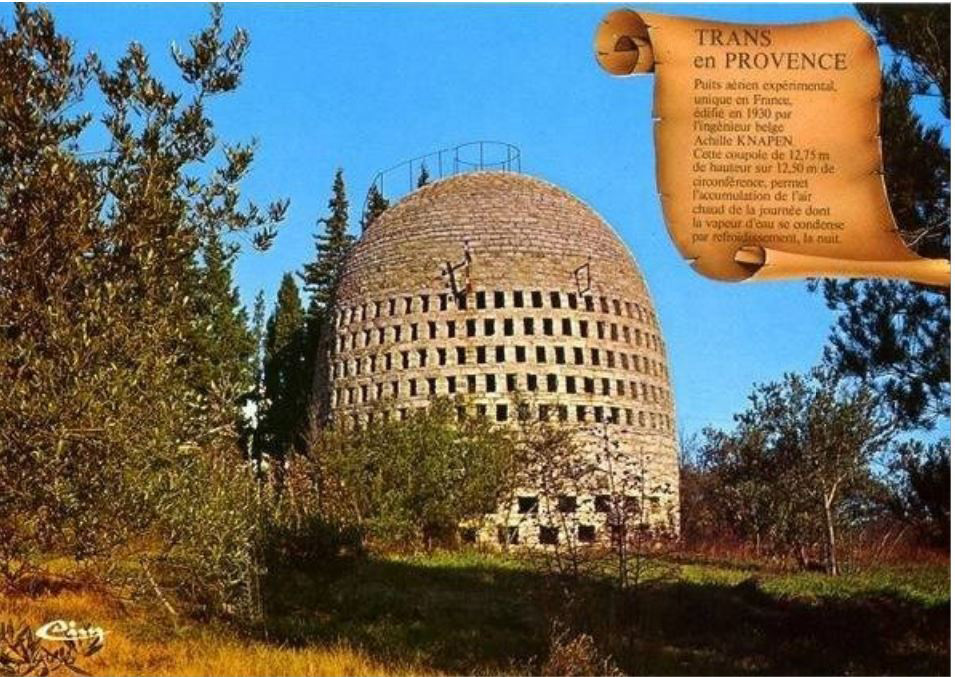 info_outline
You are here: Home / Regions / Provence Alpes Côtes d'Azur / 83-Var / A water tower ... without water, like a beehive on the ground of Provence.

It can be called "the water tower without water" or "the aerial well".
At the end of the 19th century, Friedrich Zibold, the engineer in charge of the water conveyance works, wondered if the morning dew could not be collected and used as a water reserve in regions where it was lacking.
Friedrich Zibold started in 1905 in Feodosia, Crimea, the construction of a condenser 20m in diameter at the base, 8m in diameter at the top and 6m high.
The most favorable dew production reached 350 liters per day and the experience lasted only a few years due to problems of waterproofing of the base.
Then it is in Trans en Provence that such a building was born, in 1930.
The builder of this structure, a Belgian engineer, Achille Knapen, came to Trans towards the end of his professional life. He was born in Mons in Belgium on September 29, 1860 and died in Trans on July 26, 1941 where he is buried in the cemetery of the commune.
He bought a piece of land located at 180 m altitude on a promontory covered with hundred-year-old olive trees and relatively sheltered from the drying currents of the Mistral, but exposed to the sea winds from the front.
The experiment will never yield great results.
What remains is this strange beehive placed on the soil of Provence... classified as a Historical Monument.