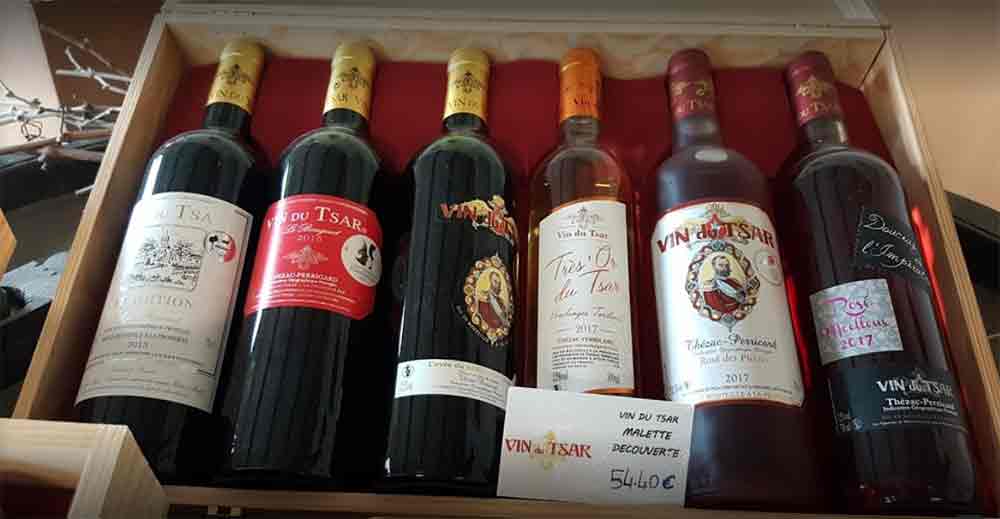 At the beginning of the previous century, a small terroir produced a wine that was said to be of very high quality, "Le vin de Thézac-Perricard".
This wine was so appreciated that it seduced many other connoisseurs such as Napoleon III and President Fallières.
The latter, a fervent defender of regional gastronomy, regularly offered it to his guests.
Among them was Tsar Nicholas II of Russia, who was won over by this wine and immediately placed a large order for it.
This news had such a great impact that the wine was called the Tsar's Wine, which attracted the greatest gastronomic critics.
In 1980, a handful of passionate men, the Vignerons de Thézac-Perricard, revived this vineyard on the rocky soil that is the plateau of the Causses.  Today, they are proud and happy to present you their prestigious range of wines, suitable to be enthroned on your table.
The current range includes three rosé and three red wines, traditional, selected or aged in oak barrels, as well as a collection of gift boxes.

The red wines :
Wine of the Tsar - Tradition - Red wine of a brilliant dress, frank of nose with a typical perfume of the main grape variety: " the Malbec ". It appears as an extremely drinkable wine, round and supple in the mouth.
Tsar's Wine - The Bouquet - This wine is the result of the selection of our best harvests. It expresses powerful aromas of hay flowers which give it great finesse.
Tsar's Wine - Cuvée du Millénaire - This cuvée is aged 10 to 12 months in oak barrels. It was launched in 1988, on the occasion of the Millennium of the Christianization of Russia by Grand Prince Vladimir (988-1988).  With a more sustained robe, it is more robust and expresses more assertive tannins and a vanilla finish in the mouth.