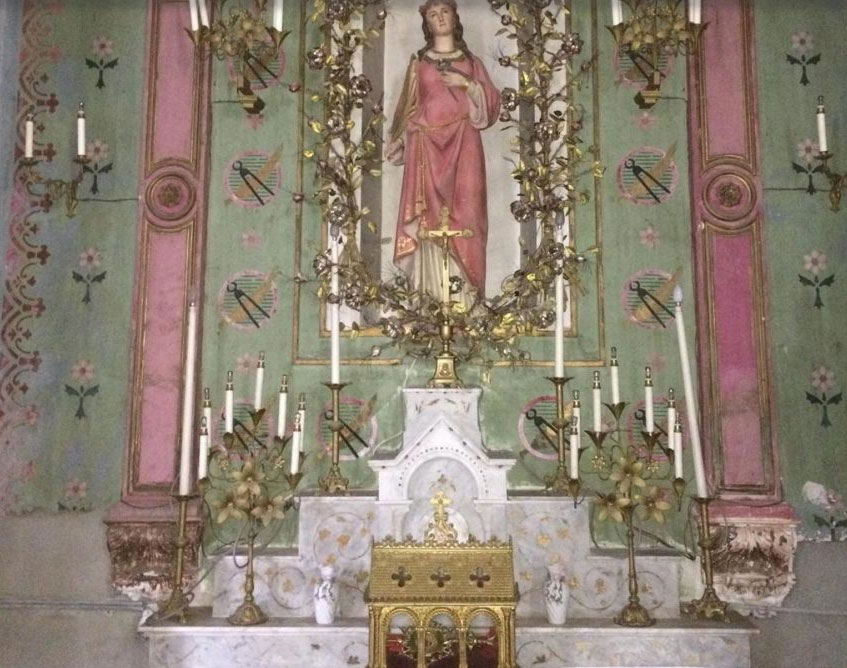 info_outline
You are here: Home / Regions / Occitany / 09-Ariège / The tooth of Saint Apollonia

The tooth of Saint Apollonia

Lézat-sur-Lèze, well known for the prestigious past of its former Benedictine abbey Saint-Antoine-et-Saint-Pierre, which became the church Saint-Jean-Baptiste, enjoys a singular notoriety.
Indeed, two Saints are particularly well known in Lézat :
- Saint-Antoine, whose hermitage houses a well known source of healing for skin diseases (shingles and eczema).
- Sainte-Appolonie whose tooth soothes the pain of teething in infants.

The tooth of Sainte-Appolonie
Every week, on Wednesdays at 5pm and Saturdays at 3pm, the church of Lézat hosts curious processions.
Indeed, a relic, the tooth of Sainte-Apollonie, has been venerated for centuries.
One "passes the tooth" on the gums of the babies who are thus protected against the pains and complications while they are drilling their teeth.
Lezat thus welcomes between fifty and eighty babies every month.

A bit of history...
Apollonia, today the patron saint of dentists, lived in Alexandria in the 3rd century and led a very pious life devoted to the Virgin Mary.
One day, young pagans asked her to insult Christ.
When she refused, they beat her, broke her jaws and lit a pyre.
Taking advantage of a moment of inattention on the part of her torturers, she threw herself into the flames and perished...
In the 11th century, during the First Crusade, the Emperor of Constantinople offered Roger II, Count of Foix, one of the broken teeth of Apollonia, who had become a saint.
On his return to Ariège, Roger offered it to the Abbey of Lézat, along with other relics brought back from the Holy Land and still kept in the parish church dedicated to Saint John the Baptist.
Thus was born the children's pilgrimage to Lézat which continues today... with success.
The other relics preserved in this church are those of St. Anthony the Great, which are invoked to relieve shingles and skin diseases.
Today, Sainte-Appolonie is the patron saint of dentists. She is invoked to relieve toothache, especially dental pain in infants.

On Saturdays at 3pm the tooth is "passed" over the baby's gums during a celebration. A medal with the effigy of the saint can be placed under the child's pillow as a complement.

Usually the tooth is passed every Saturday at 3pm.
No need to make an appointment

label Records: The +'s and -'s Made in Grand Sud