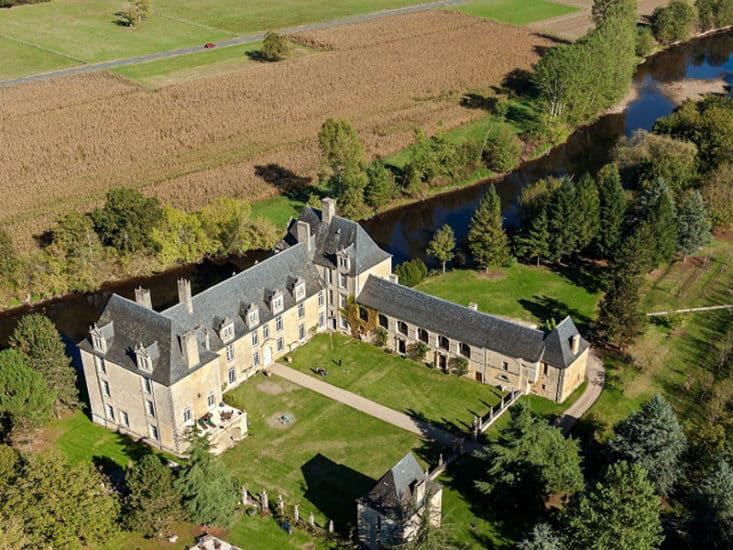 info_outline
You are here: Home / Regions / Nouvelle Aquitaine / 24-Dordogne / The castle-museum of Sauvebœuf

The castle of Sauveboeuf would date from the middle of the XIVth century. It then became the property of the De Ferrières family, vassal of the lords of Montignac. At that time, the castle must have been a country stronghold whose vocation was to protect Montignac. Over the centuries, and until the middle of the 18th century, the De Ferrières family developed within the French nobility.

In 1743, the estate became the property of Victor Riquetti, Marquis de Mirabeau, father of the famous French revolutionary, and belonged to the family for about sixty years. During the 19th century, the building belonged successively to the Chassagnac Latrade, Dehÿs and Baillemont families. In 1891, the Oberkampf family, famous in particular thanks to its canvas factory in Jouy-en-Josas, acquired Sauveboeuf and carried out major renovations there. The Oberkampf family sold the castle in 1927.

The castle will become an agricultural estate until 1975, notably with the Gengen family, then will be left abandoned until the purchase, in 1987, by the Douce family.

Sauvebœuf castle can be visited since April 2013.

The wealth of the castle...

The Château de Sauveboeuf is in the Louis XIII style and has a Renaissance terrace overlooking the Vézère river, which alone is worth a visit.
The vast rooms of this illustrious residence present period furniture, a monumental staircase in white stone, a cabinet of curiosities whose diversity of the collections of Mr. Douce, the owner, is fascinating.

The castle of Sauveboeuf, offers in its 14th century vaulted cellars, a real treasure, one of the largest private collections of Prehistory in the world.
Namely an incredible myriad of tools, jewelry and rare charms that form the first world collection of the prehistoric era. It is estimated by professionals of Prehistory, studied by researchers and curators from Europe, Beijing or New York.
It allows us to understand the evolution of man, his great capacity to adapt to the external environment, by putting in parallel his innovations in terms of everyday tools, materials used and the idea of aesthetics.

From the Erectus to the beginnings of the Neolithic period, you will be able to discover the evolution of man through different prisms: his environment, his innovations and his conflicts. Nearly 500,000 pieces including mammoth ivory ornaments more than 20,000 years old!
Yves Coppens, famous French palaeontologist and paleoanthropologist, honorary professor at the Collège de France, highlighted the quality of this exhibition. The real purpose of this collection is "to learn and restore" according to Claude Douce, current owner of Sauveboeuf and above all passionate about archaeology, prehistory and human exchanges.

label Made in Grand Sud Records: The +'s and -'s