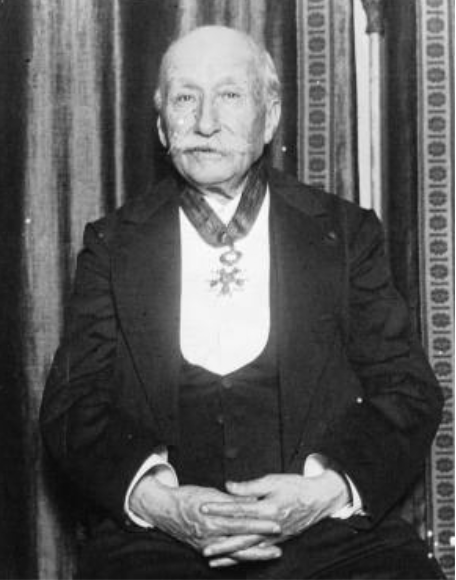 Reducing Clément Ader to the invention of the airplane is a bit short.
We owe him dozens of inventions and innovations.
Clément Ader is a French engineer and aviation pioneer, born on April 2, 1841 in Muret and died on March 3, 1925 in Toulouse.
He would have been the first to make a heavier-than-air motorized aircraft take off in 1890.
This flight, which preceded that of the Wright brothers in 1903, is however controversial.
It all began with engineering studies before arriving in Paris for the 1867 Exposition, where he discovered the Michaux velocipede and imagined replacing the iron bandage with rubber. In 1868, he started manufacturing velocipeds.
He then joined the Compagnie des Chemins de Fer du Midi.
In 1875, he imagines a machine to lay the rails, which was used for decades.
Interested in the telephone that had just appeared, he invented the handset and began to market it in Paris.
He also invented the theater phone, a telephone network connected to the Paris Opera House, which allowed people to listen to the opera while staying at home.
He is also the inventor of the stereo, which is not yet invented, by placing several microphones on the stage.
In the telephone he earns money and contacts the Government to realize his real dream: to make a strange device take off.
He presents his project to the War Ministry, and will name this ancestor of the airplane, the Éole.
The Éole is a machine that looks like a bat.
The first attempt to fly the Éole took place on October 9, 1890 in the park of the Château de Gretz-Armainvilliers, southeast of Paris.
Interested in the project, the Army contacted Ader, who made a second flight aboard the Éole in September 1891.
The aircraft positively impressed the soldiers who ordered a second, more powerful aircraft from Ader.
The man leaves the earth, the plane is born.
We know the rest...

When Vincent Auriol recorded all his conversations...