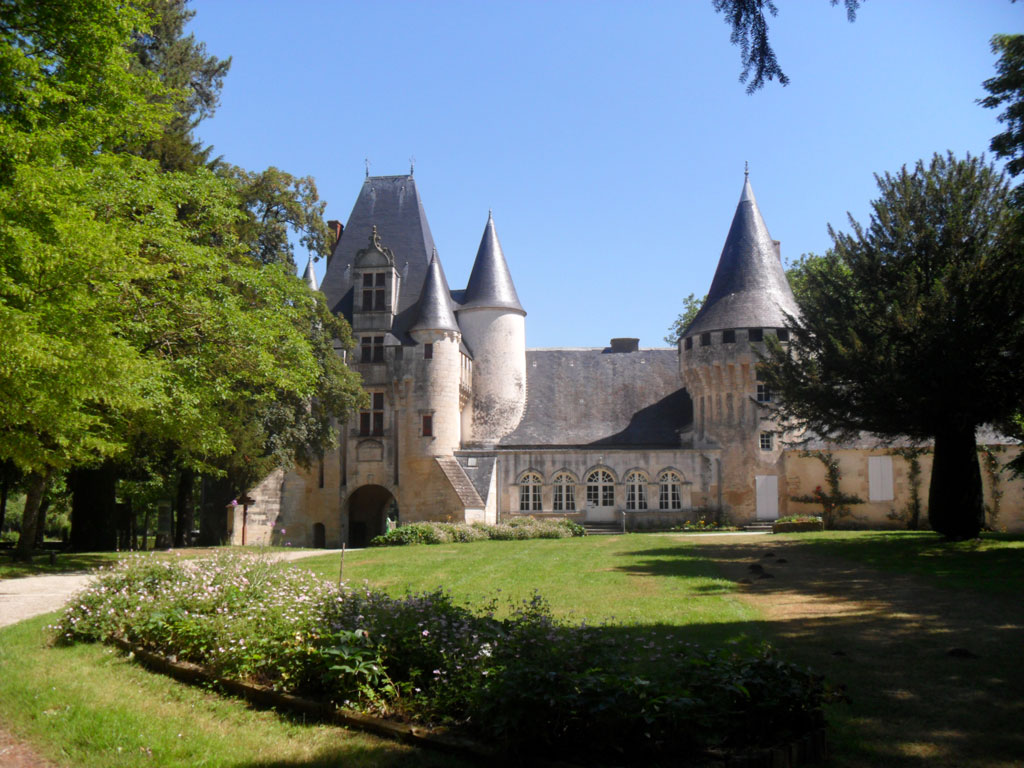 The Château de Javarzay, a superb example of Renaissance architecture

Having known an eventful history, between different families since the Revolution, the Château de Javarzay was more or less abandoned to its ruins until 1982, when it was revived following its purchase by the commune of Chef-Boutonne.

Since 1983, the castle has been restored to its former glory, thanks to the work of the association "Les Amis du Château de Javarzay", and to a vast restoration operation by the Monuments Historiques in 1995.
The rooms were renovated by the "Friends of the Castle", joined in 2003 by the "C.A.I.L. Association".

The site of Javarzay has been occupied since antiquity by a Gallo-Roman farm, the domain of Gavarcius, which gave rise to the name of Javarzay, a name that evolved over time.
It became a Royal Merovingian farm in the 6th century, Clothaire I, son of Clovis and husband of Radegonde, staying there in 559 and Saint Junien, legendary hermit, being received there.

Built by François de Rochechouart, companion in arms of François I around 1515, it encompassed 12 surrounding towers, and was one of the first castles of the Renaissance in Poitou.

The castle of Javarzay was the property of notorious people such as the family of La Rochefoucault, the Count of Ponchartrain, Minister of Louis XIV in the 17th century, Chrétien Guillaume de Lamoisgnon de Malesherbes, lawyer for Louis XVI in the 18th century.

Built by a Tourangeau architect in the 16th century, built of tufa stone and covered with slate, the castle of Javarzay offers the silhouette of a small castle of the Loire.

The imposing gatehouse combines both the Feudal and Renaissance aspects. Its square tower flanked by turrets dominates the site and its surroundings. On its two facades, the courtyards are interrupted by a set of mullioned windows with very rich and careful Renaissance decorations.
Its porch preserves the traces of the old drawbridge and the numerous passages of carts and pedestrians. It leads to the inner courtyard, symbolized today by a hedge of yew trees representing some of the twelve original towers.
The unique feudal-style spiral staircase turret serves all the rooms of the castle.
The chapel has a beautiful Renaissance carved door and magnificent stained glass windows recently restored.
The large corner tower surrounded by a covered way with large crenellations is topped by a very slender conical roof. Its machicolations are impressive. The visit highlights the exceptional original framework.

Adjacent to the body of the former seigneurial dwelling, between the two towers, the 19th century orangery welcomes visitors.
The right wing, added in 1820, offers an exhibition space to artists and local associations.

Two tours allow visitors to better appreciate the richness of the site.

The visit " Au fil du temps " which retraces the life and work of Jean-François Cail, born in Chef-Boutonne in 1804.

He was a great industrialist, 1st supplier of sugar mill equipment in the world, 2nd French builder of steam locomotives including the famous Crampton and a great innovator in industrial farms.

The visit allows you to see his bedroom, a remarkable collection of headdresses and bonnets from the region, more than 400 pieces on display:

- Headdresses of the department and its celebrities: the Mothaise, the Créchoise and the Malvina,
- Headdresses from neighboring departments including the Sablaise,
- Caps, embroidery and needlework.

Scenes from the life of the past
- The seamstress,
- The ceremonies of life: Baptism, Communion, Marriage.
The walk in the covered way
- It offers a 360° landscape with views on the architectural details.
The discovery of the frameworks
- Authentic framework of the Round Tower,
- The frame of the square tower in the shape of a ship's hull.

The second tour, "Au fil du patrimoine", allows you to visit the exterior of the castle with an audio-guide.

During this commented walk, you will discover

- The exterior surroundings of the castle, its architecture, its chapel, its arboretum, which houses two trees listed in the inventory of remarkable trees of the Deux-Sèvres, a Ginkgo Biloba and a Sycamore Maple.

- The church of Saint Chartier (12th and 16th centuries), classified as a historical monument in 1840. Located on a secondary route to Santiago de Compostela and endowed with 115 relics sent from Rome by Cardinal Perrault in 1506, it was venerated as Rabelais recounts in his Pantagruel, "Some people, while fleeing, devoted themselves to Santiago, others to the relics of Javarzay". It was enlarged at the beginning of the 16th century. A reproduction of the grotto in Lourdes shows the attachment of this parish to the cult of Mary and many statues decorate this magnificent church. The choir and the portal bring a renaissance touch to this building.
- The porch of the old priory
- The Boutonne River
- The "Grange aux souvenirs" which presents 8 scenes of the life of the past,

- The house of the Laundresses and its wash house with all the elements necessary for the "Bugeaie" or "Bugeaille", names given to the laundry as it was practiced in the past.