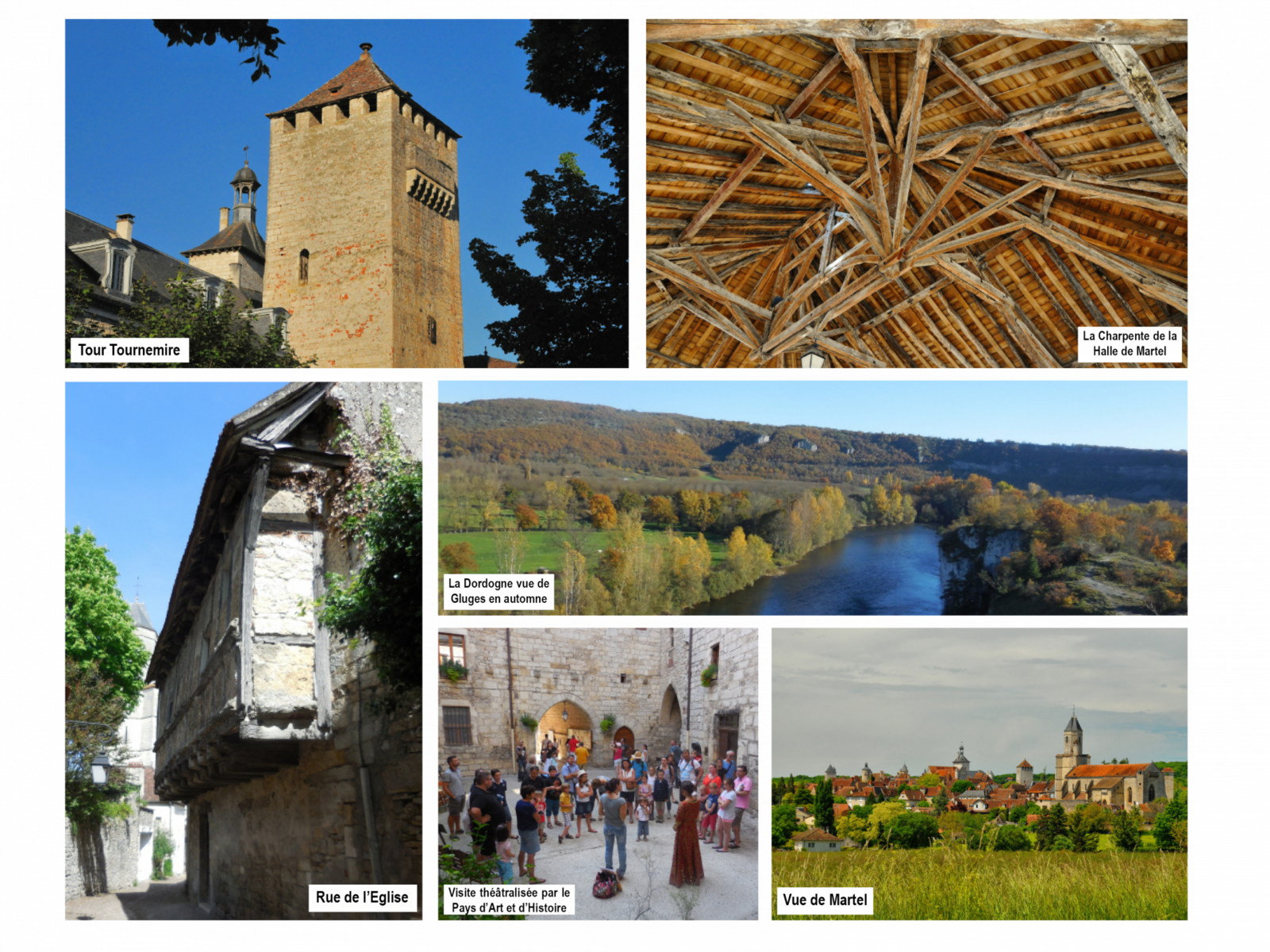 info_outline
You are here: Home / Regions / Occitany / 46-Lot / Martel, the city with 7 towers

Martel, the city with 7 towers

Martel is a small medieval city of the Dordogne Valley, born between the 11th and the

between the XIth and the middle of the XIIth century and property of the viscount of Turenne from 1180.

It has no link with the legend of Charles Martel.

The first mention of Martel, "Martell", "Martellum" in a document appears in the cartulary of the Abbey of Aubazine from 1140, and in the history of the Viscounty of Turenne.

"The economic attraction of its geographical position made Martel a "crossroads" city at the crossroads of the Paris-Toulouse royal road, which passed near Martel and Gramat before the 17th century, from the ancient Gallo-Roman road linking Paris to the south of France, and the salt road linking Bordeaux and the Atlantic to Aurillac.

This salt was taken up the Dordogne by the gabariers to Souillac where it was unloaded, then followed the Martel-Vayrac land route to the Auvergne.

After many ups and downs, when Martel welcomed Henry the Younger, co-king of England and elder brother of Richard the Lionheart, who died in the Fabri Hotel after having pillaged Rocamadour in order to pay his troops...

When in 1219, a Charter of Franchises exempting the inhabitants from taxes is at the origin of the prosperity of the city. Then the 100 years war where the city will never be taken militarily thanks to the negotiation skills of its consuls.

Then the treaty of Brétigny in 1360 which delivered it to the English but which Duguesclin will take back militarily in 1374. In the Middle Ages, Martel was known for its numerous wheat, salt and cattle merchants, as well as for its royal seneschaussée, both a tax district and a court of justice, presided over by a lieutenant-general of the seneschaussée.

The second golden age of the city was in the 15th and 16th centuries. Prosperity returned in 1459, with the resumption of fairs and an extraordinary vitality of births, then activity slowed down in the 17th and 18th centuries, as the road from Paris to Toulouse no longer passed through Martel but through Cressensac and Souillac.

The population decreased slightly from the 18th century onwards, then more sharply from 1870 onwards, until the 1980s.

The truffle trade allowed the small town to rebound economically from the 19th to the beginning of the 20th century, thanks in particular to the railroad from the end of the 19th century.

The remains and an important architectural heritage

Similarly, the construction of the Palais de la Raymondie began in the 13th century by Bernard de la Raymondie, receiver of royal taxes, and was completed in 1330. This urban palace consists of four wings around a courtyard accessed by two arcades. It has three levels of elevation with on the south facade a string of Renaissance arcades, mullioned windows and medallions. Today it is the property of the municipality which has installed the town hall and the tourist office.

The Church of Saint-Maur, built in the 13th and 14th centuries on an ancient Romanesque church, was an integral part of Martel's defensive system. Of Gothic aspect, with imposing dimensions, it measures 56 meters long with a 48 meters bell tower. It was a fortified church, with battlements, loopholes and walkways. The glass roof in the heart of the church dates from the 16th century and is listed.

The Condamine Hotel, a former mint used in the Vicomté, is composed of two turrets of unequal length.

The market hall, built at the end of the 18th century on the site of the Arsenal and the first town hall, is remarkable for its chestnut woodwork and its "conches" (grain measures).

Not to mention the Hôtel Fabri and other private mansions, the fortified gates and a large number of beautiful 19th century houses, particularly on the outskirts of the old town.

The 15th century Hôtel Fabri is also called the Duboy house. It was here that Henri Court Mantel, the eldest son of Henri II Plantagenet, King of England, of the sulphurous Eleanor of Aquitaine, and brother of Richard the Lionheart, died on June 11, 1183, shortly after having pillaged Rocamadour. The house is marked at the top of the tower with the English coat of arms, the erect leopard.

The Tournemire was part of the 12th century enclosure and bears the name of the bourgeois family who occupied it. Watchtower and defense tower, lordly prison, then royal and finally municipal.

The Cordeliers Tower is the only vestige of the Cordeliers convent, a mendicant order that only settled in rich cities.

Barri de Brive and Porte de Brive, one of the nine fortified gates that closed the second enclosure to protect the barris (districts) built outside the first enclosure. The pilgrimage route to Rocamadour ended here.

The Rue Sans-Lys is home to the most imposing façade of the Palais de la Raymondie, with its three clearly visible levels: the arcades intended for commerce on the first floor, the beautiful bays illuminating the residence and reception rooms on the first floor, and the outbuildings on the top level. The small watchtowers at the corners, which had a defensive role, became a sign of prestige.

The Arcambal House, a medieval dwelling, was remodeled at the end of the 15th century, with a Renaissance decoration on its portal. The door knocker is placed at the height of a man on horseback.

The House of Vidalie or House of Silence

The rue Droite, the main street that crosses Martel from east to west, is home to a long house where vestiges of colonnaded bays (13th c.) and a door with an accolade lintel (end of 15th c.) still remain. Opposite, a merchant's house with two large pointed arches on the first floor.

The Gallo-Roman Museum of Uxellodunum

The Gallo-Roman museum of Uxellodunum, founded in 1931, is located on the 2nd floor of the Raymondie palace, in the heart of medieval Martel. You can discover there permanent collections but also temporary exhibitions going from the Prehistory to our days.

It hosts the discoveries made on the site of the Fountain of Loulié in Puy d'Issolud. The collections continue to grow in the following years and even today.

An excavation depository allows archaeologists and prospectors-inventors to deposit their finds there but also to welcome researchers wishing to study certain pieces more precisely.

Martel is a gourmet city and a favorite place to taste walnuts, truffles and other products on the markets and in the numerous restaurants.

Martel knew a period of glory in the 19th century thanks to the truffle trade. You can still go on board the "Truffadou", a steam train that carried the truffles up the cliff.

Another tourist attraction is the "Reptiland" vivarium which houses snakes, lizards, turtles and crocodiles exposed to daylight in a covered and air-conditioned area.

The Chateau des Doyens, residence of Fénelon... and heritage space