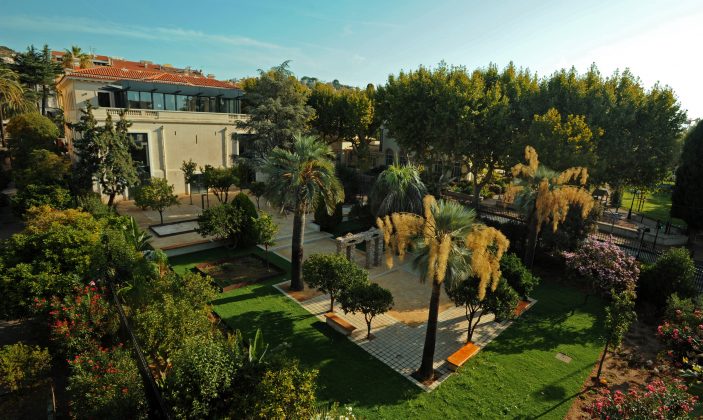 The Bank, Museum of Cultures and Landscape

The former Banque de France in Hyères has become "The Bank", the new Museum of Cultures and Landscape.

Since November 27, 2021, the Hyères collections, classified as a Museum of France, have been reborn in this prestigious space.

The important collections labeled Musée de France have thus found refuge in the former apartment of the director of the Bank and in the vault.

Two new places to contemplate the evolution of the city and the coast, under the eye of artists, but also through the know-how and architectural changes...

The plans were drawn up by the Hyerese architect Léon David, in collaboration with the chief architect of the Banque de France, Alphonse Defrasse, Grand Prix de Rome.
The Bank's garden offers an exceptional setting for relaxation in the continuity of the museum. The garden has been redesigned and is now part of the renaissance of this place by hosting events or ephemeral artistic installations. This French-style garden now regains its Mediterranean character.

The collections classified as a Museum of France are presented in the former Banque de France d'Hyères, whose redevelopment project was directed by Alain-Charles Perrot, chief architect of historic monuments.

In this 2,188 m2 space, more than 200 works tell the story of the evolution of the region's landscape through various disciplines: fine arts, archaeology, natural history, ethnography...

An inaugural exhibition "Facing the Sun" presents until March 27, 2022, 70 works painted between 1850 and 1950 paying tribute to the light of the region: paintings by Auguste Renoir, Paul Signac, Henri Edmond Cross, Pierre Bonnard or Louis Valtat and Raoul Dufy, are thus exposed.

The Bank - Museum of Cultures and Landscape of Hyères

The gorges of the Verdon, unforgettable place

The Memorial of the Former Special Services of National Defense, ASSDN, unique in France