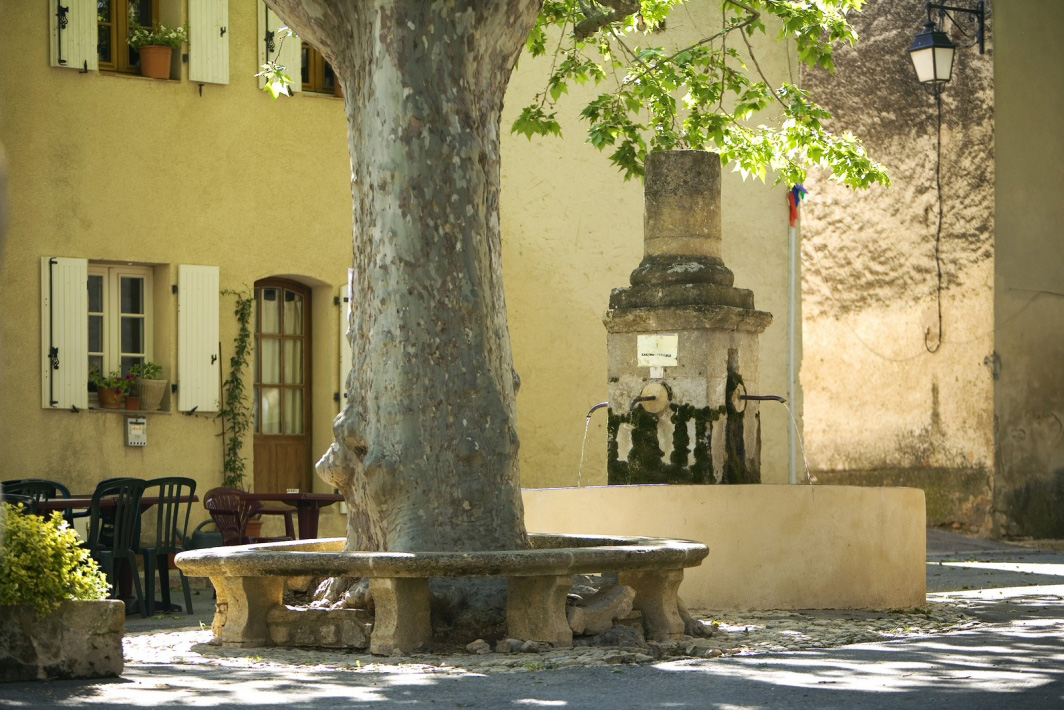 Peypin d'Aigues is a small village of about 500 inhabitants, in the country of Aigues, in the south of the Luberon.

The village is home to springs that flow from the heights of the Luberon, the water being

Two important sources, by their durability and their flow, are captured by the lord of the Tour-d'Aigues in the 15th century: the Mirail and the Hermitants.

The first Peypin is not on the site of the current village but 1 km to the northwest, on the hill of Castelas (the word castellas testifies to the existence of a castle protecting the village), born late (late twelfth century or early thirteenth century), a deed of 1400 notes the abandonment and ruin of "Peypin du Castelas".

The second Peypin was born in 1505 from the works of the barons of the Tour d'Aigues, who wanted to revitalize their land and offered the settlers land to build on. The lord of Peypin d'Aigues, Antoine René de Bolliers passed a "deed of habitation" with 15 Waldensian families to repopulate the land and restore it to its former glory.

In 1545 the massacre by Meynier d'Oppede, the village was burned and looted. François 1st lets the troops of the parliament of Provence massacre the Vaudois of the Luberon.

Peypin d'Aigues is burned, part of the inhabitants massacred, several sent to the galleys. The Vaudois convert to Protestantism. In 1582 the parish priest of Peypin d'Aigues counted 90 Catholics and as many Reformed. Even the church of Saint-Jérôme, which belonged to the cathedral chapter of Saint-Sauveur d'Aix, was destroyed. The canons had it rebuilt in 1620.

Peypin was to suffer a new hemorrhage due to the banishment of the Huguenots. A century later, their property was confiscated and redistributed to the Catholics.

The village is surrounded by three hamlets. The one of Fonzillouse (in Provencal, or Fontjoyeuse in French: its name comes from a fountain) is the most remarkable and includes buildings dating from the 17th century. It seduces by its typical Provencal atmosphere, between flowered terraces, small vaulted alleys and outside stairs.

The two other hamlets are Notre Done and the hamlet of Les Roux.

To see the Protestant Temple of the 19th century, built in 1967 with the help of government subsidies and a subscription open to a population that far exceeds the Protestant community of Peypin d'Aigues. Lyon and Orange participate in it.

Another monument is the Church of St. Jerome, built in 1626 to replace the old parish that had fallen into ruin and was far from the village. The building has a single nave and is separated by a triumphal arch.

Take a rest on the pleasant Place de la Fontaine, then enjoy the botanical path of the Vallon des Hermitans.

Without forgetting the Crosses...

Real beacons, the crosses mark the locations chosen according to the role they are intended to play and are designated by various specific terms:

- Pilgrimage cross, marking the paths leading to chapels and hermitages,

- Cross of Justice on the main square of the village,

- Cross of the bridges,

- Cross of Rogations, where one went for the blessing of the land and the crops,

- Boundary crosses, boundaries of parishes or domains belonging to an abbey,

- Jubilee Crosses erected following the evangelical mission of a preacher from outside the parish,