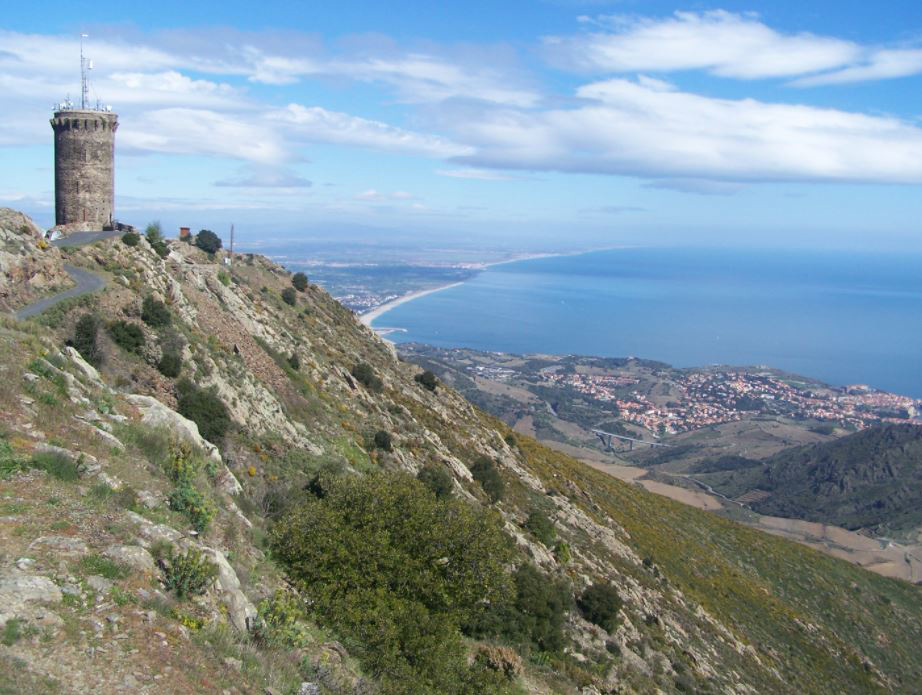 The Madeloc Tower, lighthouse of Collioure...

Built on a rocky peak at 659m of altitude, the Madeloc tower which dominates Collioure and the Côte Vermeille is part of a network of signal towers which, since the end of the 13th century, converges towards the keep of the palace of the Kings of Majorca in Perpignan.

Its ambition was to warn of the arrival of invaders, by signals of smoke during the day and fire at night.

It was also used to signal the arrival of barbarian ships.

The villages of the Roussillon plain all saw the tower of La Massane, the twin tower of Madeloc.

Collioure, the Puig del Mas, the isolated farmhouses of the hills and valleys of the Côte Vermeille could not see it.

It is to prevent these inhabited places that the Madeloc was built around 1290.

It was also related to La Massane, Querroig and the other smaller towers surrounding Banyuls.

The Madeloc Tower is two floors crossed from the base by stairs with massive stone steps, sealed into the thickness of the wall.

The stairs lead to the terrace at the top where the watchmen and the person in charge of lighting the fire stood.

Outside, there are also a few loopholes.

Below the tower, a cistern collected rainwater through a pipe that led from the terrace.

The tower is crowned by a belt of 22 brackets.

It was also called by our ancestors the "Devil's Tower".

Today the Madeloc tower has become a television relay for all those who, from Argelès to Cerbère, do not have a direct view of the Pic Neulos.

Eus, a beautiful village and the shadow of Boris Vian