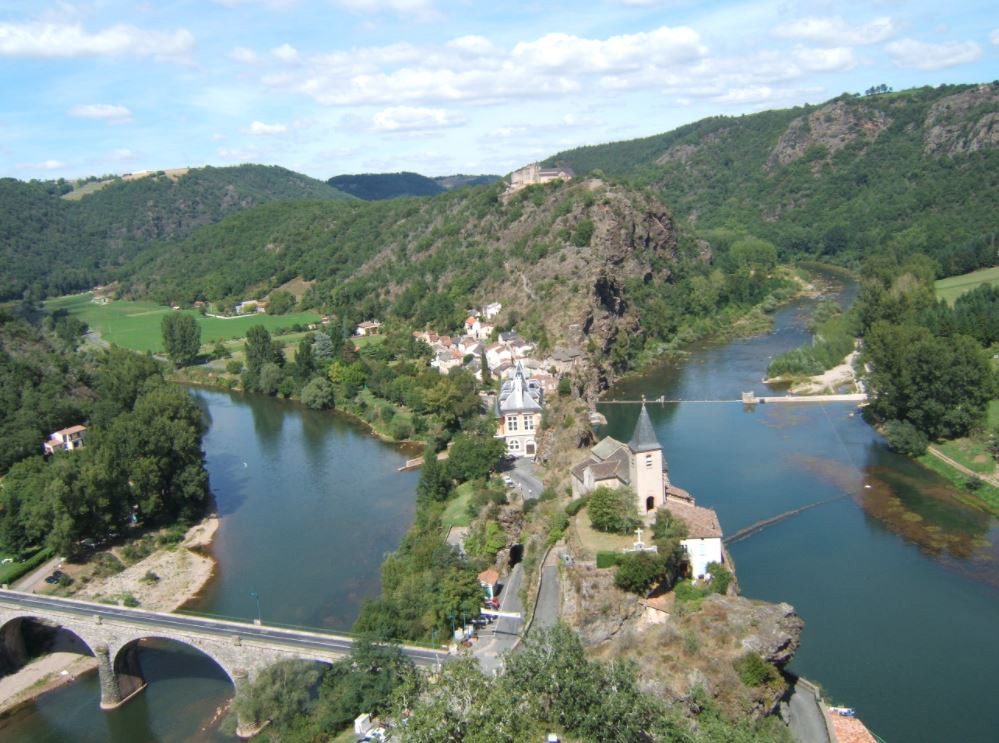 info_outline
You are here: Home / Regions / Occitany / 81-Tarn / Ambialet, city of character, in the loop of the Tarn River

Ambialet, city of character, in the loop of the Tarn River

Ambialet, classified in 2018 "Small city of character" offers the particularity to be built on the narrowest isthmus of Europe, Indeed, hardly ten meters separates the two banks of the Tarn at the level of the hydroelectric power station EDF.

From the Celts to the Counts of Toulouse and the crusade against the Albigensians, this unique geographical situation has incited men to take refuge there or to install their power.

Ambialet has always welcomed the settlement of tribes, Gauls, Romans, English and then the Viscounts of Albi. The latter built a formidable castle there.

In the Middle Ages, Ambialet became the seat of the Vicomte des Trencavel, rivals of the Counties of Toulouse, then was occupied by Simon de Monfort during the crusade against the Albigensians.

During the Crusade, Simon de Montfort did not fail to claim ownership of the castle where he summoned the Count of Toulouse, Raymond VI. In the hands of the English during the Hundred Years' War, of the Protestants during the Wars of Religion, ruined, Ambialet was rebuilt in the 17th century.
The village is divided into two parts :

Before the Revolution, Ambialet le Basé was the seat of the Viscounty and two ferries provided communications to Valencia and Courris until the construction of the bridges after 1900.

The Holmière gate protects the village from the floods of the Tarn. A path through the houses leads to the Saint-Gilles church, a Gothic building burnt down in 1568, restored in 1994-1995 and used as an exhibition space.

At the top of the peninsula stands the priory, a monastery, and its 11th century Romanesque church.

This top of the peninsula was occupied very early on by a small monastery serving a church dedicated to the Virgin.

In 1057, the Viscount of Albi donated this monastery and the church to Benedictine monks from the Saint-Victor Abbey in Marseille.

These monks occupied the monastery, without interruption, for five centuries.

After the Viscounty of Ambialet was attached to the kingdom of France, the monastery gradually diminished in importance.

In 1458, it came under the authority of the chapter of Montpellier and its prior became a sort of dean parish priest of the three parishes of Ambialet, Lacondamine and Courris, whose monks of the priory provided religious service.

The monastery is abandoned by the Benedictine monks at the time of the Wars of Religion and, until the Revolution, with its dependencies, it is only a distant benefit of the Montpellier chapter, which makes the income to the parish priest of Ambialet.

At the Revolution, the goods of the priory passed to the commune of Ambialet.

To date, the Priory can only be visited during the guided tours organized by the Tourist Office in July and August. It is now occupied by students of Saint Francis University of Pennsylvania (USA).

It is the administrative headquarters of the municipality, dominated by the ruins of the Castella castle, which can be reached by a path that leads to the ruins of the Saint-Raphael castle, from where you can admire an exceptional panorama.

Also in the municipality, there is the hamlet of La Condomine with its houses built around the church of St. Peter with its remarkable Romanesque bell tower. Bonneval is another hamlet of Ambialet, crossed by the GR 36 where you can discover the ruins of an old castle. The church is dedicated to Saint Carrissime.

Other small hamlets make up this very extensive commune....

The castle of Grandval, in the middle of the water

This astonishing "abandonment tower" of Gaillac