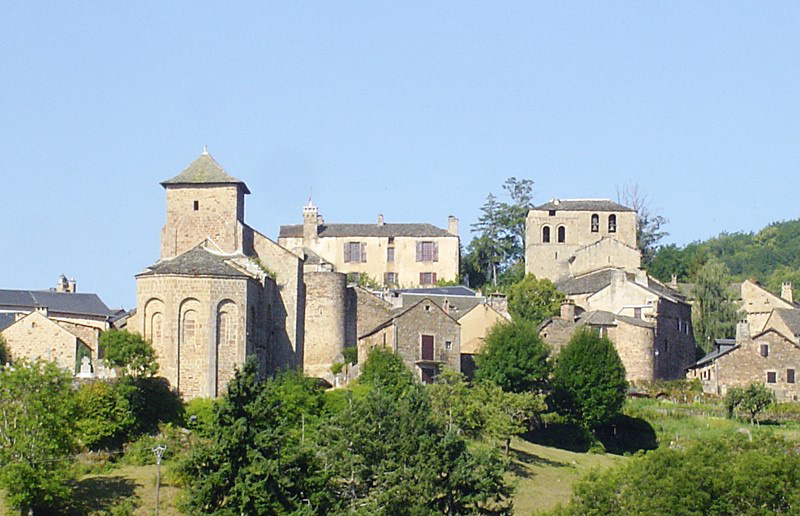 Situated in the Regional Natural Park of the Grands Causses, the medieval city of Castelnau-Pégayrols is today home to five monuments listed as Historic Monuments.

Castelnau de Lévézou in the time of the Lords of Lévézou

The De Lévézou family, today one of the oldest in France, founded the château-fort or "new castle" (castel-nau), whose existence is attested as early as the 11th century.
In 1070 Aicfred de Lévézou donated his church of Saint-Michel de Castelnau to the abbey of Saint-Victor de Marseille to set up a monastery. With the support of the abbots of Marseille, Arnaud de Lévézou became bishop of Béziers (1106) and archbishop of Narbonne (1121) and played a great political role in the history of his time as legate of the Pope and governor of Toulouse, for Count Alphonse Jourdain (1119-1121).

His nephew Bernard will be bishop of Béziers.

The 2nd, 3rd and 7th Crusades will each see one Lévézou leave for the Holy Land. In 1289, Bernard de Lévézou and Hugues d'Arpajon are in conflict for the possession of Castelnau. A judicial duel took place on May 3, 1289. At the end of the fight Lévézou must give way to Arpajon.

The house of Arpajon will gradually become the most powerful family of Rouergue, but Castelnau is not his main residence.

The ramparts will be used again during the religious wars (1556-1632). The Arpajons of Castelnau became warlords of the Protestant party of which Millau was one of the most active strongholds.

Under the Arpajons and until the end of the old regime, Castelnau is a small rural center where the regular monks (until 1734), the parish priest and the priests in charge of the parish as well as several small local lords who have their house in the village live together. The commune is administered by a municipality before the letter. Each year, the general assembly of the inhabitants elects two consuls to administer "the community".

In 1759, in Versailles, Louis XV created the marquisate se Pégayrolles, of which Castelnau became the chief town and conferred it on Etienne Hypolite de Pégayrolles, president of the parliament of Toulouse.
Contrary to the Arpajon, the president of Pégayrolles resides in his castle in Castelnau, which he brings up to date.

High magistrate and man of letters, Mr. de Pégayrolles will be noticed by his spirit of absolute independence from the royal power, fighting against the Parliaments (1764), or the revolutionary power.

President de Pégayrolles deliberately entered the camp of counter-revolution. On the strength of the promised constitutional liberties, he founded a royalist club in Millau. He was soon dislodged by force (May 1791) and died a victim of the prisons of terror (October 1794). In April 1834, a royal ordinance of Louis Philippe created the commune of Castelnau as it is today.

The strategic position of the village, standing upright on the edge of a cliff and closed upstream by the castle has facilitated the preservation of monuments.

The crypt of the church of Saint MichelT

Romanesque church of the 11th century, the church of Saint-Michel shelters, under the choir, a crypt whose source testifies to a distant and secret past...

Still in operation, the church of Saint Michel is the parish church of the village and hosts concerts and recitals in the summer.

A Romanesque church of the 11th and 12th centuries, the church was built for the parish around 1082 after the Benedictines had settled in Saint-Michel.

The paintings that adorn the choir date from the 17th century. For more than 10 years now, an exhibition has been organized there every summer "Notre Dame des Arts". The place also hosts concerts, shows and exhibitions.

Monastery founded by Bernard de Millau after the donation by Aicfred de Lévézou in 1070. The various rooms of Romanesque style as well as the courtyard are at the disposal of the associations for the animation of the village.

The Prior's room has a coffered ceiling and a 15th century fireplace.

The fortified enclosure at the end of the 15th century.

It is remarkable for its round towers, its loopholes and in places its parapet with stairs and crenellated parapet.

It was the master masons of Saint Beauzély who built the fortifications of Castelnau in order to protect many other villages from the road workers who plunged the country into great insecurity at the end of the Hundred Years War.

Streets and old houses of the village

Each contour, nook and cranny, offers a surprise to the visitors. The medieval city, protected downstream by the rock and upstream by the castle, has not undergone major changes and invites you to go back in time, a few centuries ago.

Another listed site is the fountain of the castle fed by the hydraulic system that dates back to medieval times.

It is a multiple use system

The diversity of its components is a measure of the different services provided by this water supply system. Indeed, it provided four types of functions:

Military function: the supply of water to the castle's cistern to support its defense.
Civil function: the supply of water to the village.
Agricultural function: the irrigation of the land near the village.
Industrial function: because this system allows the operation of four grain and oil mills, driven by hydraulic energy. These mills were used for three types of production: food flour, oil and flour for livestock.
Finally, it is worth mentioning the mills of which three remain today, one of which is undergoing restoration.