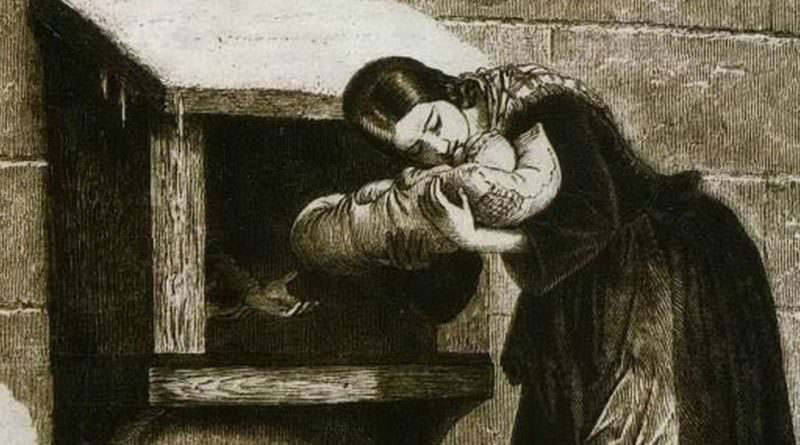 This astonishing "abandonment tower" of Gaillac

Babies who have gone wrong in life...

All that was left then was to abandon anywhere, or infanticide.

These dramas finally gave rise to the appearance of the "abandonment tower".

This is simply a box, often in the form of a revolving cylinder, allowing a mother to drop her baby in anonymously, without even having to meet someone to hand him over.

This kind of practice was common in the Middle Ages and until the 19th century in Europe and beyond, for example in Japan.

In France, they were usually inserted into the wall of a hospital or hospice. Once the baby had been dropped off by its mother on the street side, and the door closed, all that was left for her to do was to wave the bell and run away. Alerted, the staff on the other side only had to turn the device to retrieve the baby. This was practiced until the 1940s.

It was Saint-Vincent-de-Paul who had the first abandonment tower installed in Paris in 1638. Much later, these abandonment towers were legalized by an imperial decree in 1811 against street abandonment, and there were as many as 250 of them in France. They were closed in 1863 and replaced by an "admission office", then abolished in 1904.

Finally, in 1941, "under X" childbirth was instituted.

Unfortunately, these mechanisms have been very useful.

An example: the pivoting abandonment tower of the Provins hospital was in operation from 1854 to 1859, and during this period, almost five babies a week were delivered there. If it has become very unusual to be able to observe one of them, and to imagine the scenes that took place there, it was unfortunately not at all the case at the time.

Since the 2000s, these "abandonment towers" have reappeared all over the world, particularly in South Africa, Germany, Austria, Belgium, India, Italy, etc...

Today, these mechanisms have gradually been removed and dismantled. At least two remain, one in Gaillac, in the Tarn, and the other in Rouen in the Seine-Maritime, in the wall of what has now become the Charles Nicolle Hospital.

"Following an imperial decree against abandonment in the street, the Saint André de Gaillac hospital officially became a trustee hospice in 1812, one of the four in the department. The tour itself was set up in 1832. Children were deposited, often with a trousseau and sometimes a sign of recognition, such as a note or playing card.

The registers mention each element and some are still attached to them, like ribbons. At the sound of a bell, Sister Tourière would retrieve the child, keep him in hospital for two days and then put him in a nursery. The sordid names they were given bear witness to the little attention they received and the majority died before the age of 5".

The castle of Grandval, in the middle of the water