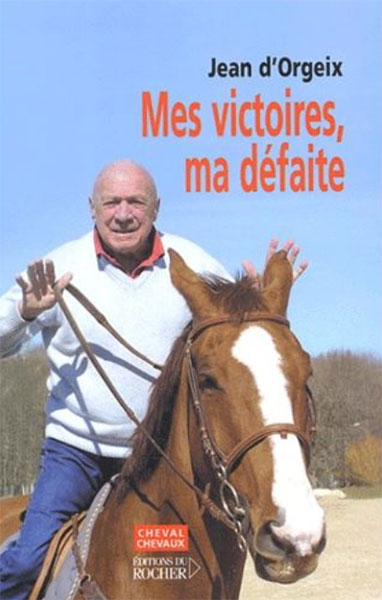 Jean d'Orgeix, full name Jean-François de Thonel, 5th Marquis d'Orgeix, is a French actor, rider and aviator, born into a family whose birthplace is the region of Foix in Ariège.

He spent his youth in the Paris region.

Also known by the nicknames "Jean Pâqui", "the Knight of Orgeix" and "the White African", he was in turn an actor in the cinema and the theatre, international rider and bronze medallist at the London Olympic Games in show jumping in 1948, stock-car pilot, world champion in aerobatics, bush-hunting guide and politician.

In 1990, his last challenge, he sailed from Marseille to Calcutta in an inflatable dinghy.

The Château d'Orgeix, birthplace of the family

The cradle of the family is the castle of Orgeix which still belongs to the heirs.

The Orgeix family is what was known as the "maitre de forges".

The oldest parts date back to the 17th century, but the castle was not built all at once.

It has about forty rooms and is close to the former forge of the Thonel family.

They became lords of Orgeix after the village had passed through many hands.

On 5 June 1938, when the village of Orgeix was bombed - with no deaths to deplore - by three-engined planes coming from Spain in the middle of the civil war, the Marquis Emmanuel de Thonel d'Orgeix saw the roof of his castle damaged by a bomb.

This same man, a Croix de Guerre during the First World War, was murdered by the Germans in 1944 for having sheltered resistance fighters.

In 1941, an EDF dam was built downstream from the castle, creating the artificial lake of Campauleil at the foot of the building, giving it a romantic appearance.

The Museum of the Bishop's Palace