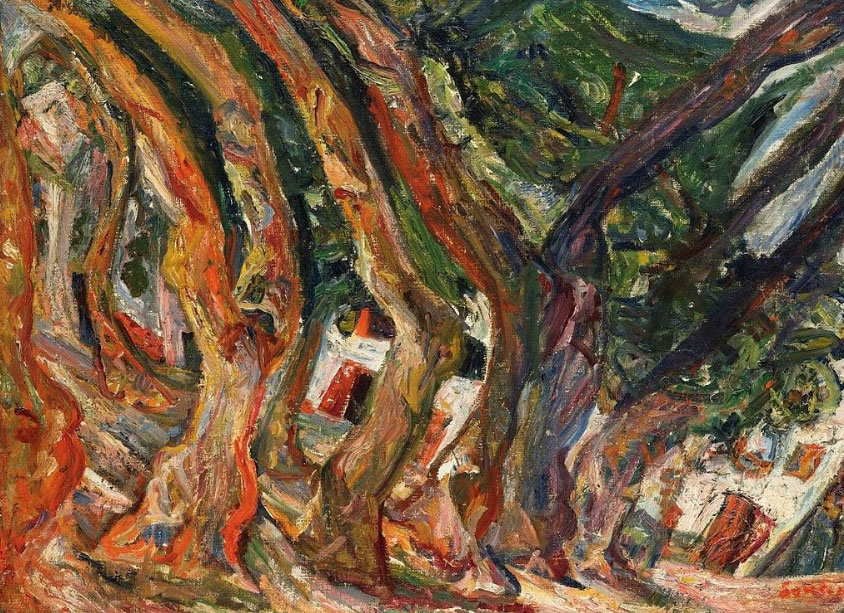 The town of Céret in Roussillon welcomed between 1919 and 1922 Chaïm Soutine, the Lithuanian-born painter and friend of Modigliani.

In contact with these landscapes, his palette and his style were transformed.

After studying at the Fine Arts School in Vilna, Lithuania, where he befriended Kikoïne and Krémègne, Soutine joined his friends in Paris in 1913.

For a few months he attends classes in the Cormon studio at the Ecole des Beaux-arts.

At the Louvre, he admires the works of Rembrandt, Le Tintoretto, Courbet, Chardin and others.

He stays in Cagnes in 1918 with Modigliani and discovers the Mediterranean and colour.

Life in Céret, from misery...

The following year, pushed by his merchant Zborowski, he joins Céret for a long period of three years, from October 1919 to 1922, during which he will also go back and forth with Cagnes and Paris.

At Céret, Soutine invested the five francs he received from his merchant in tubes of paint.

He lives miserably, dressed in the same warm blue throughout his stay and on which he wipes his brushes.

The inhabitants have nicknamed him "el pintre brut", the dirty painter.

Zborowski describes his protégé's Cretan period as follows: "He goes to the countryside where he lives like a wretch in a kind of pigsty. He gets up at four o'clock in the morning, walks twenty kilometres, loaded with his canvases and colours, to find a site he likes, and goes back to bed forgetting to eat.

Then he unzips his canvas and, having stretched it over the previous day's one, he falls asleep next to it".

At the beginning of his stay, Soutine will no doubt live in "casots", small lean-to buildings built in the fields for agricultural equipment. Later, he will rent rooms with the Céretans living in the city centre, sometimes offering to pay the rent with a work of art.

From 1919 to 1922 he painted a considerable number of canvases, estimated at around two hundred.

These "Céret's paintings" will occupy a special place in his career.

During his stay, his very figurative style evolved towards a confusing and even violent expressionism.

The energetic facture, the thick paste, the swirls of colours and movements will give the strongest and most convincing expression of his art.

The painted views are increasingly close together, bushy and unstructured, crushed in the plane of the painting and cut by the edges of the canvas.

A movement agitates them, Soutine avoids strict verticals and horizontals.

The process accentuates the inclination of houses and trees that wobble.

Soutine worked directly on the motif, painting his landscapes in nature.

But the energy expressed in these canvases is also reflected in the portraits and still lifes painted at that time, such as the series of "Men in Prayer" or "Gladioli".

He also began, in Céret, the series of "Bœufs écorchés" (Flayed oxen).

Soutine's social condition was radically transformed at the same time as his reputation was made.

During the summer of 2000 the Musée de Céret organised an exhibition of more than 70 paintings executed by this artist in the city, revealing, beyond this very strong expressiveness, the deep, almost visceral link that has been established between Soutine and the landscapes of Céret.

This piece giving an overall view of the town was painted by Soutine at the beginning of his stay, probably from the road to Fontfrède.

The colours are autumnal, ochres and reds predominate. In three years Soutine has captured in his compositions the most emblematic places of the city such as the Place de la Liberté (work deposited in the museum in 2006), the Church of Saint Peter, the Capuchin Convent, the Tins ravine...