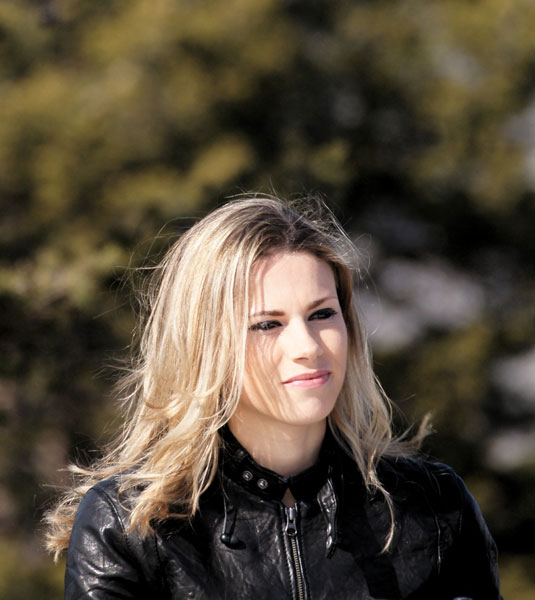 Marion Rousse, born on August 17, 1991 in Saint-Saulve (Nord), is a cyclist and consultant for French television. In 2012, she became French road champion.

Marion Rousse was born into a family where cycling is an institution.

Her father practiced cycling for about twenty years and three of her cousins, David and Laurent Lefèvre and Olivier Bonnaire are former professional cyclists.

She remains faithful to the family tradition by starting cycling at the age of 6 at the Roubaix velodrome.

She studied in Cambrai.

In 2020, she is in a couple with Julian Alaphilippe and they live in the Principality of Andorra.

The relationship is made official on the occasion of their confinement in Andorra following the Civid 19 pandemic.

Marion Rousse wearing the jersey of French champion in 2013.

She turned professional at the age of 19 in 2011 and then ran for the Vienne Futuroscope team. The following year, she became French champion on the road.

At the age of 20, she received this title for the elite and youth categories. In 2013, she signed with Lotto Belisol Ladies.

At the end of 2015, at only 24 years old, she decided to stop her cycling career to devote herself to her career as a television consultant.

From 2013 to 2016, she was a consultant for Eurosport, where she took part in the programme "Les Rois de la Pédale".

At the same time, she is also hostess on the podium of the Tour de France, where she gives the Antargaz combativity prize to the rider designated the most deserving of the day by a jury.

In 2017, she remains an ambassador for the Antargaz Fighting Prize and becomes a member of the jury that selects the Super Combatif of the Tour de France, but no longer participates on the ceremonial podium.

In 2017, she leaves Eurosport to join France Télévisions.

She comments her first race on France 3 with Alexandre Pasteur, also from Eurosport, and Laurent Jalabert on the occasion of the Paris-Roubaix 20171. She then continues this activity notably on women's competitions and is a consultant every year on the Tour de France where she comments the stage and participates every day in Laurent Luyat's "Vélo Club".

She is also sometimes involved in Stade 2 and Tout le sport on France 3.

In August 2019, she returns to Eurosport to comment live on events not broadcast by the public service, notably the stages of the Tour of Spain.

In 2019, she becomes deputy director of the Tour de La Provence.