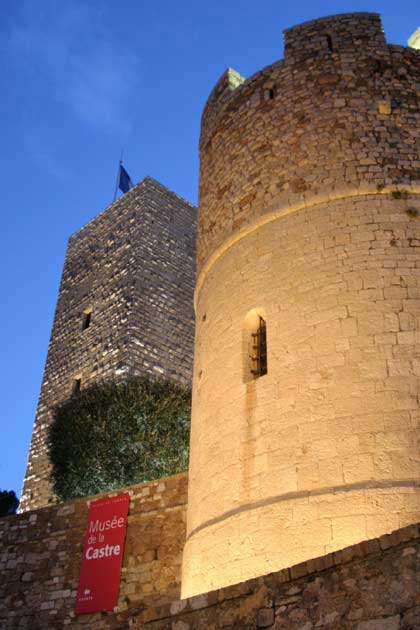 Located on the heights of Le Suquet, the historic district of Cannes, in the remains of the medieval castle of the Monks of Lérins, classified as a historic monument, the Castre museum overlooks the Croisette, the bay and the islands of Lérins.

This museum, very rich and surprising, presents prestigious collections belonging to the City of Cannes, primitive arts from Himalaya-Tibet, Oceania, pre-Columbian America and Mediterranean antiquities, musical instruments from around the world (Africa, Asia, Oceania and America) and also paintings and orientalist objects from the 19th century.

Its square medieval tower of 109 steps offers an exceptional 360° panorama of Cannes and its region.

In 1919, the city of Cannes acquired all the buildings to set up its museum, then housed in the Town Hall.

This convent building, built on a square plan, like that of a medieval castle with a keep, integrates a main building and a chapel into its defensive enclosure.

At the entrance to the museum, a garden planted with Mediterranean species, notably large umbrella pines, welcomes visitors.

In the middle of the visit of the museum, you will be able to reach the interior courtyard of the castle, in the center of which was built the square tower which allowed the watch.

In a series of small rooms surrounded by gardens, the collections of art and objects from Oceania, the Himalayas, the Arctic, a rich collection of Mediterranean antiquities and pre-Columbian ceramics are displayed.

The 11th-century Sainte-Anne's Chapel brings together an exceptional collection of musical instruments from all over the world - Asia, Africa, America, Oceania -.

Three rooms devoted to Orientalism and the arts of Iran open onto the museum courtyard and the medieval square tower.

The Orientalist rooms give way for part of the year to temporary exhibitions highlighting the variety of Cannes' collections.