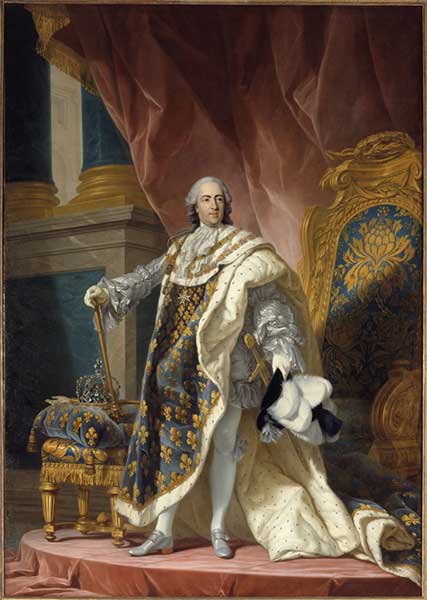 info_outline
You are here: Home / Regions / Occitany / 82-Tarn-et-Garonne / The fake painting was a real...

The fake painting was a real...

For two centuries a painting that adorned a wall of the Town Hall of Moisac was in fact a rare portrait of Louis XV reproduced by Jean-Martial Frédou de la Bretonnière.

When Céline Piazza, an employee of the Moissac heritage department, took down this monumental painting which had adorned the town council chamber for two centuries, she noticed inscriptions on the frame and the frame.

This portrait of Louis XV, which the inhabitants of Moissac took for a simple copy, proved to be much more precious.

Céline Piazza asked Emmanuel Moureau, the curator of Moissac Abbey, to come and observe the painting.

They then discovered marks signed "Musée Royal", then the inscription "painted in 1766 by Frédou at the expense of the music in the King's chapel".

By comparing several of the artist's works, the curator traced them back to Louis-Michel Van Loo, official painter of the Spanish court and portrait painter to Louis XV.

But the truth is not yet complete: if Van Loo painted this canvas on which the sovereign is represented standing, dressed in his coronation robes, it is not the painting of Moissac.

In 1755, this painter joined the King's Cabinet of Paintings in Versailles as a copyist painter.

Only a few years after the master, he painted the replica of Van Loo's painting.

Emmanuel Moureau, the curator of the Moissac Abbey is formal, on France Info: "It is a true copy of an original work painted by Michel Van Loo in 1760".

"It is interesting because this painting of Moissac was offered by the musicians of the King's Chapel, so it is an additional argument for its national heritage interest".

One mystery remains: the original by Louis-Michel Van Loo cannot be found and only two copies exist to this day, one in Versailles, the other in Beaune.

The application for registration as a Historic Monument is under consideration.

After its restoration, this painting should leave the Council Chamber to be exhibited in the cloister of the Saint-Pierre Abbey.

For the record, we note the resemblance of the portrait with ... Edouard Balladur ...

The Toys Museum of Montauban