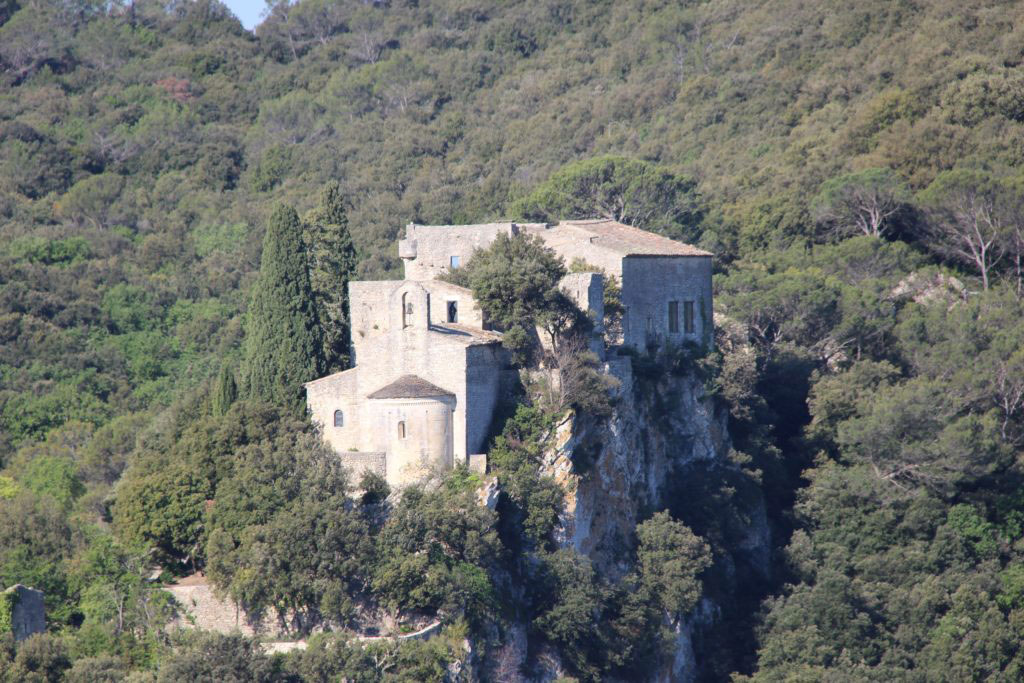 "Quau vai a la Ròca se i cròca". Whoever goes to La Roque clings to it...

About ten kilometres from Bagnols-sur-Cèze, La Roque-sur-Cèze, classified as one of the most beautiful villages in France, has only 179 souls, truly privileged people...

To visit the village, cross the bridge, classified as a historical monument, which spans the Cèze with its twelve arches. It dates from the 13th century and its name, "Pont de Charles Martel", remains an enigma because the former king of France has no link with the history of La Roque-sur-Cèze.
This medieval village, perched on a rocky spur, is entirely pedestrianised, with houses huddled at the foot of the castle, along picturesque calades with picturesque names.

The most courageous will pass through the street "Rompe-cul", with its well chosen name, to reach the top of the village.

Beautiful stone houses are dressed with a pretty Mediterranean vegetation, oleanders, Virginia creepers, cypresses, hackberry trees... which give the alleys a touch of colour from spring onwards.
The street names also evoke the sericultural past of La Roque-sur-Cèze: la traverse des Mûriers, la rue de la Magnanerie... and one notices many mulberry trees, whose role is only ornamental today, but whose leaves fed silkworms in the 18th and 19th centuries.
The alleys intertwine, criss-cross and climb up to the 12th century castle, a private residence that cannot be visited.

Admire the 12th century Romanesque Chapel, also attached to the castle, whose chevet is decorated with "gear teeth". It is also a private property and is only open to visitors from time to time.

While strolling around the village, you will see the pétanque players, place des Marronniers and you will refresh yourself in the shade of the mulberry tree, at the bistrot de la Roque, place Palou. Place so named in homage to Jean Palou.

Jean Palou, innkeeper and artist, very well known in the 50s, counted Jean Carmet and Marcel Amont among his regular customers. He was one of the initiators of the restoration of the village, partly in ruins at the time.

A few hundred metres from the village, the famous Sautadet Waterfalls are worth a visit. Here the Cèze has carved its way violently through a limestone massif that blocked its passage, and the water flows through a spectacular maze of crevasses and giant pots.
The site is dangerous and swimming is strictly forbidden.

The name Sautadet comes from the expression "the jump of Hades", Greek God of the Underworld. This interpretation would confirm the dangerousness of the site which has 23 deaths in 20 years.
Less than 8km from La Roque-sur-Cèze, the villages of Cornillon and Goudargues are worth a visit. Don't miss a visit to the Chartreuse de Valbonne, an impressively large monastic complex, nestled in a valley in the heart of dense forest.