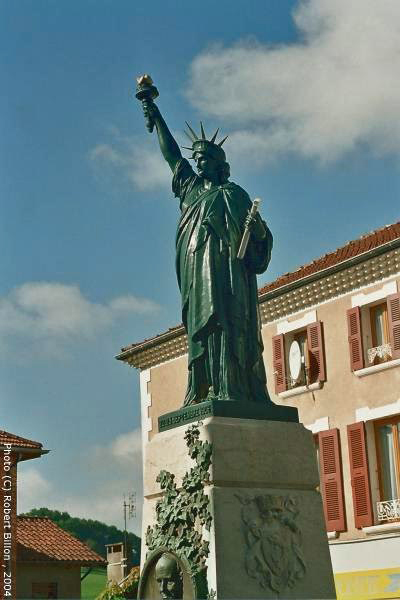 info_outline
You are here: Home / Regions / Occitany / 34-Hérault / Hérault - The Statues of Liberty

Hérault - The Statues of Liberty

The Statue of Liberty in the Port of New York, by the French sculptor Auguste Bartholdi, was unveiled on July 4, 1886, but there are others.

The Freedom of Lunel

The one in Lunel was erected in 1889 for the centenary of the Revolution. It comes from the Gaget-Gautier company like the one in New York but is only 2.80m high and weighs 500 kg.
Like many other bronze statues, the Liberté lunelloise was cast during the 39-40 war to support the German war effort.

On the occasion of the bicentenary of the Revolution, a new statue of the Republic illuminating the world was inaugurated on February 25, 1989, thanks to a public subscription.

The names of the donors are enclosed in a box in the stone base.

The second "Liberté" of the Hérault is in Cessenon.

This statue is a resin casting made by the Colmar museum and served as the figurehead of the cruise ship "Maxim's des mers" during the transport of European and American personalities between the two countries, on the occasion of the centenary of the inauguration of the Statue of Liberty in 1986.

Once the cruises were over, the statue was stored in a hangar in Nice, then the company tried to sell it without succeeding.

The ship's captain then offered to retrieve it, which was done, and brought it back at his own expense to his home in the hamlet of Lugné.

He then gave up a few square metres of land and the town offered a base, a pillar of an old bridge over the Orb.

From the statue thrones at the entrance of the hamlet.