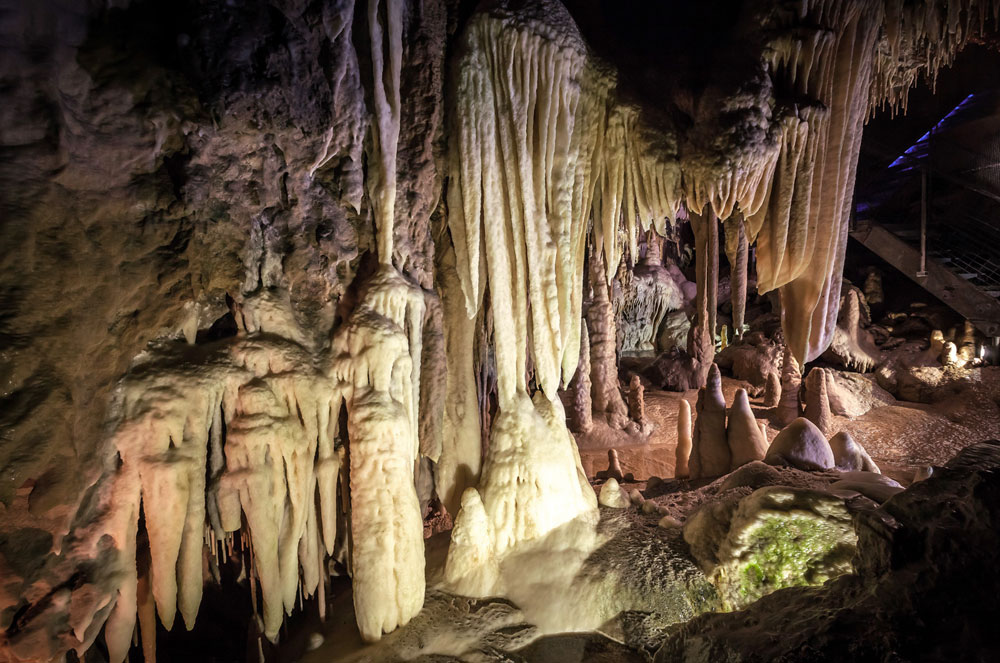 Some 300 m from the medieval city of Villefranche-de-Conflent, listed as a UNESCO World Heritage Site, the caves of the Canalettes are double. The caves themselves and the Grandes Canalettes, nicknamed "the underground Versailles".

In 1957 the Fuilla network introduced them to Henri Salvayre, a hydrogeologist and specialist in the underground world. In 1978, the latter met Edmond Delonca, and together they undertook enormous work. In 1981, they began exploration in the company of Joseph Pujol, a former miner, and Henri Lozano, a speleologist who was a member of the GEK, which led to the discovery of the White Room in 1982.

They then studied the development of the Grandes Canalettes, currently unique of its kind and carried out with the greatest respect for the underground world.

The visit of the Grandes Canalettes, considered among the most beautiful in France, is done at your own pace, following the explanatory light panels or, for children, by following ED, the mascot who will guide the youngest in a fun treasure hunt.

It begins with the Drapery, a set of spectacular concretions of a sparkling whiteness, and then reaches the White Room, discovered in 1982. The visit continues to the Atolls Lake, then to the grandiose Angkor Temple Hall, a rare rarity. In the summer, every evening at 6pm, presenting your entrance ticket, you can attend a superb sound and light show in the middle of galleries carpeted with lunar shapes.

The Totem room is accessible to handicapped people in wheelchairs, as its discoverer H wished. Delonca.

At the end of the visit of the Grandes Canalettes, an exhibition on the journey of the water and a documentary on the development of the cave are proposed to you.

It is preferable to cover up the temperature is 14°.

Caves of the Canalettes