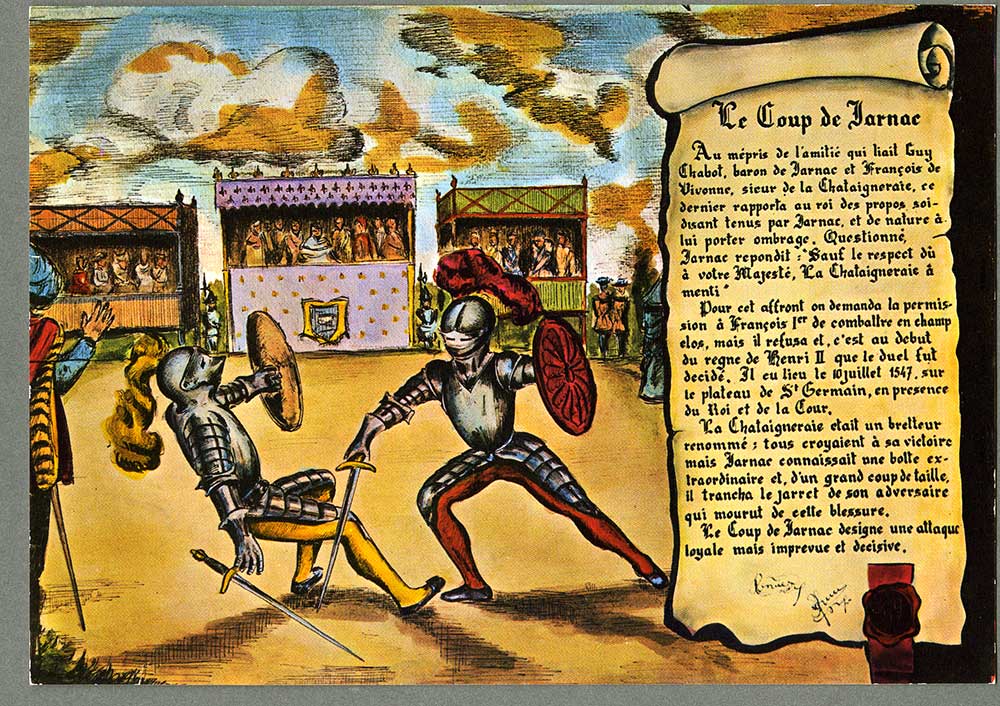 Certainly we know Jarnac, thanks to François Mitterrand who was born there. But the city was well known, for much longer, since July 10, 1547 exactly....

A look back at the past

We are just before the death of Francis I and the coronation of his son, Henry II. A matter of marital honour opposed the latter to the lord of Jarnac, Guy Chabot de Saint-Gelais, who, noting the offence, provoked him into a duel. However, to provoke the Dolphin is to provoke the King and the latter, facing his kingdom, cannot fight a duel.

Francis I died, the Dauphin, who became King, wishing to get rid of the Lord of Jarnac, appointed François de Vivonne, sire of the Chastaigneraie, to represent him in a duel.

Reputed to be one of the finest blades in the kingdom, this one was supposed to make only a bite of Jarnac.

Guy de Chabot, aware of his own weakness, asked to benefit from the Italian master of arms, Captain Caize, who taught him a secret boot.

The fight took place on the terrace of the castle of Saint-Germain en Laye, in front of the King's Court and a large crowd.

In front of a stunned audience, the Lord of Jarnac wins thanks to his secret boot, mortally touching his opponent.

The King then decided to ban the judicial duel and made Jarnac part of history.

Until the end of the 18th century, Jarnac's coup was an expression synonymous with skill, ingenuity and perfect loyalty.

But two hundred and twenty-four years after the battle, in 1771, the dictionary of Trévoux, the work of the Jesuits, added to the definition of Furetières of 1727, which said that it was a deadly and unexpected blow, "is always taken in the wrong direction".

Coup de Jarnac then expressed a certain lack of nobility, even a twisted blow...

At the end of the 19th century, Larousse and Littré rectified the meaning somewhat by writing "the coup was found very clever and provides a proverbial expression that took on an odious meaning; but it is a misuse, Jarnac's coup was not unfair, it is a loyal but unexpected, unexpected coup".

In fact, this secret boot was unknown in France at that time and proved decisive for Jarnac's victory.

Coup de Jarnac is synonymous with skill and ingenuity.

Saint Peter's Cathedral in Angoulême, a symbol of Romanesque art

label Gastronomy [to drink] Made in Grand Sud cities and villages

Confolens, a medieval city with a very rich heritage