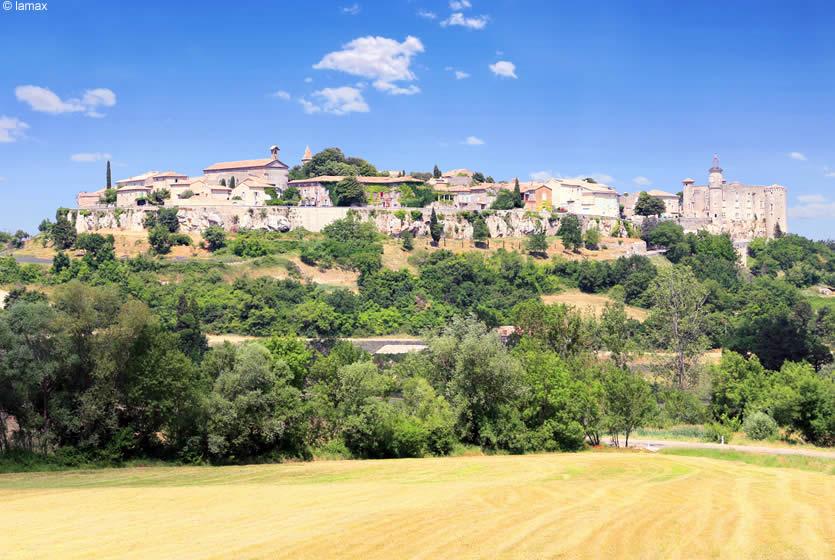 Perched on a rocky outcrop, the village of Lussan, classified as one of the "Most Beautiful Villages in France" and labelled "Village de Caractère", offers the attraction of a medieval town surrounded by ramparts on a plateau overlooking the garrigue.

It is also the birthplace of the Gide family.

Lussan is characterized by its narrow streets, its old stone houses, testimony of a rich past. The ramparts and the parapet walk allow you to discover a magnificent panorama of the Cévennes and the Mont Ventoux.

From a prehistoric and geological point of view, Lussan offers two important places, the menhir known as "La Pierre Plantée" and the sumptuous gorges of the Concluses which testify to the very ancient presence of man in a remarkably preserved natural site.

In Lussan, it is essential to see the Concluses, whose wild landscapes are only accessible on foot, in the summer period when the bed of the torrent is dry.

Also to be seen, "Le Jardin des Buis", an enclosed garden in the heart of the village, planted with boxwood and Mediterranean species.

One should not forget "La Pierre Plantée" (The Planted Stone) which dominates the site of Les Concluses. This large menhir, one of the tallest in the Languedoc region, bears witness to a devotion to the divine powers.

One must also stop at the Château de Lussan, which dates from the 15th century and has been listed as a Historic Monument since 1985. Today it houses the Town Hall.

Another castle, the Château de Fan, its park and its sacred spring, former home of the Gide family, was listed as a Historic Monument in 1972.  It was bought by Théophile Gide, the great-grandfather of the writer, who was awarded the Nobel Prize for Literature in 1947. The castle acquired by the commune in 1920 was a gendarmerie until 1980. The name of the castle "Fan" comes from the nearby spring where there was a Gallo-Roman temple (Fanum) dedicated to nymphs. A statue was found there. It is located in the hall of the town hall.

Finally, we will take advantage of the visit of Lussan to go to the 14th century chapel and visit the 3 silk spinning mills which made the economic apogee of Lussan in the 19th century, and are listed in the General Inventory of Cultural Heritage.