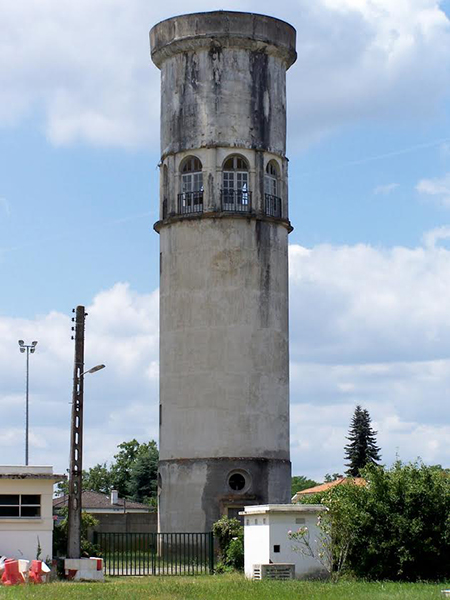 Located in the immediate vicinity of the Chavat park, the water tower is the first work of art in France by the famous architect, Le Corbusier.

In the beginning, when François Thévenot had a castle built, and designed by the landscape gardener Henri Marmisse a vast park surrounding it, he also wanted to ensure that the house and garden would be supplied with power and therefore designed a small electric plant next to the park.

Then he asked a Swiss friend for advice on the construction of a water tower. This friend was none other than the father of a young architect who was soon to become famous, Charles Édouard Jeanneret, known as Le Corbusier (1887-1965).

Le Corbusier, who was then working for the Société d'Application du Béton Armé (SABA), designed the water tower, and the SABA built it.

It is a reinforced concrete building in the form of a column shaft in which a helical staircase rises. Two-thirds of the column is interrupted by an entirely glazed gloriette with 8 French windows that Le Corbusier calls "la garçonnière".

After the Second World War, the estate was split up and the water tower disused. In 1983, it was spotted by architects. A few years later, in 1987, the Group of Five, 5 architects working in the Aquitaine region and concerned about the preservation of the architectural heritage of the 20th century, signed an emphyteutic lease with the commune of Podensac giving them the use of the place for 99 years.

The Group of Five is now working on the restoration of this heritage and its animation.

The water tower is now listed as a historical monument along with the Chavat park to which it is attached.