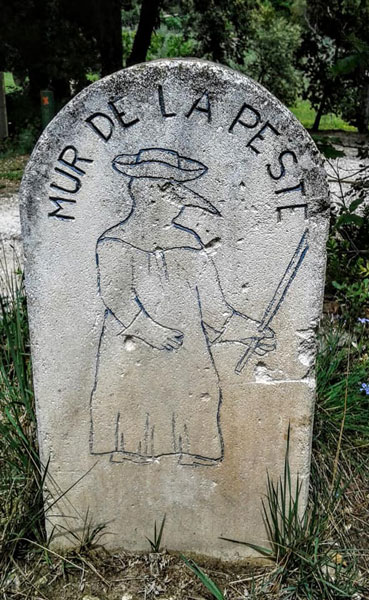 The wall of plague

On the plateau of Vaucluse, a wall is a witness of the great plague of 1720 which killed more than a fifth of the population of the Comtat.
In 1720, the Grand Saint-Antoine, a ship from the Levant, brought the plague to Marseille. Very quickly, the epidemic spread in Provence and reached Apt. To prevent it from entering the Comtat Venaissin, the Pope's vice-legate had a dry stone wall built from Monieux in the north to the Taillades sur la Durance.
At the beginning of 1723, when all danger of contagion was removed, the wall was abandoned.
This plague wall, called at the end of the epidemic "the line of the curse", follows the crest of the Vaucluse mountains for 25 km. It starts at the Pas du Viguier south of the Nesque gorges and ends at the Baume farm south of Cabrière-d'Avignon.
It was built in dry stone using stones found on site. The assembly is coarse and irregular and very often wobbly. Left totally abandoned from 1723, there was only a shapeless heap of stones left when in 1986 enthusiasts began to survey it.
After 30 days of inventory, volunteer workcamps totalling 120 days of work (between 1986 and 1992) will ensure the restoration at both ends.
Since 1986, the "Pierre Sèche en Vaucluse" association has been surveying the "plague wall" and the accompanying installations, restoring parts accessible to walkers and opening a historical trail through the Monts de Vaucluse.

The itinerary given by the association "Pierre Sèche en Vaucluse".
Take the Chemin des Esperelles in front of the school. Follow the GR de Pays (yellow-red) up to the post Chante-Perdrix. From there, follow the GR 6 (white-red) to the post called Le Mur de la Peste. Follow the Wall of the Plague (faced with the spread of the plague in Provence, the Vice-Legate of the Pope decided in 1721 to protect the Comtat Venaissin by a 27 km wall). There are regularly guardhouses and shelters (fodder and rest of the soldiers) to join another post La Citerne. Then continue on the GR 6 towards Fontaine-de-Vaucluse and the Valette post. Continue by the yellow markings and reach the post La Bastide rouge, and take the direction of Lagnes, by the GR de Pays des Monts de Vaucluse (yellow and red).

Do not miss the visit of the village of Lagnes, join the car park.