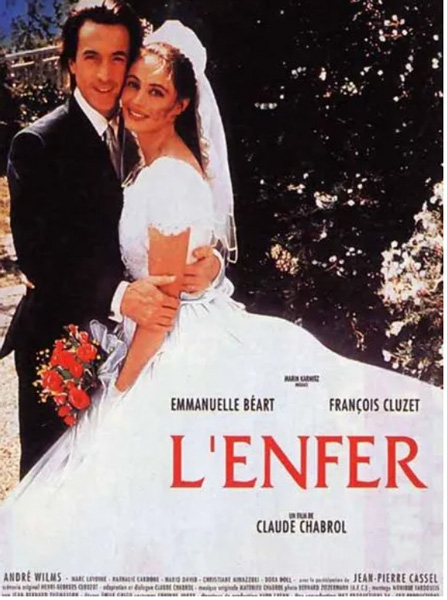 The film was originally written by Henri-Georges Clouzot, who began shooting in 1964, with Romy Schneider and Serge Reggiani in the lead roles.

Serge Reggiani fell ill (officially, from pneumonia, in fact, he was suffering from depression) and had to be replaced by Jean-Louis Trintignant, then it was Clouzot's turn to suffer a heart attack, whose period of convalescence did not allow him to finish shooting.

Chabrol took over the script in 1994.

All smiles to Paul (François Cluzet). He finally becomes the owner of the inn where he worked and marries Nelly (Emmanuelle Béart), one of the most beautiful women in the region.

She soon gives him a child.

But Paul is in debt and faces competition from other innkeepers.

He starts drinking more and more, and above all he is convinced that Nelly is cheating on him.

He even ends up hearing voices telling him so, until he literally goes mad.

The film was shot on the shores of the Saint Ferréol lake, in Castelnaudary and its surroundings.

The scene with the girl with the balloon was filmed in the rue de l'Hôpital at no. 64, the scene in which Paul pursues Nelly, in the rue Gambetta at no. 11.

Martino's garage is located at 8 rue de Dunkerque and Nelly's mother's house in the same street, at No. 55.

In the film, we can see the Saint-Michel de Castelnaudary church as well as the building of the Caserne Lapasset in which until 1986 the 4th regiment of the French Foreign Legion was stationed.

In "L'Enfer", the audience immediately recognizes the actors playing the star couple of the film, namely Emmanuelle Béart and François Cluzet.

But many personalities, who are a priori not known to the general public, are present in the film.

For example, Thomas Chabrol, who plays Julien, is the son of the director of "L'Enfer", Claude Chabrol. Marc Lavoine had the first important film role of his career, while the interpreter of Marylin, Nathalie Cardone, would go down in history three years later thanks to the hit "Hasta Siempre, Che Guevara" in 1997.

Tea and Kimono Ceremony at the Georges-Labit Museum