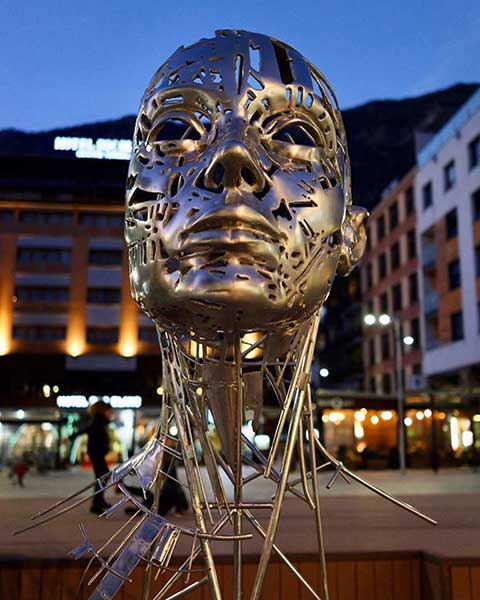 In the Principality, many of the churches and chapels are Romanesque.

But alongside the ancient heritage, Andorra reveals a modern, contemporary heritage.

A Nefertiti with Blind Eyes has been installed in the Plaza de los Coprínceps in the municipality of Escaldes-Engordany.

This work is by the sculptor Jordi Díez.

"Nefer 2.0", i represents the face of the Egyptian deity in steel and based on a portrait.

It belongs to a series created by Dalí and symbolises the passage of time.

It was originally ceded to the Government of Andorra by the art collector and Dalí's trusted confidant, Enric Sabater, in 1999.

Its current location in Plaça de la Rotonda was inaugurated in 2010, following its transfer to the Municipality of Andorra la Vella.

Sculpture made up of seven human figures that evoke the stylites of Constantinople and that can be seen as a metaphor for the seven parishes of Andorra.

In the Plaza Lídia Armengol in Andorra la Vella, the seven poets are an image of calm and reflection in the midst of the tumult of the city.

The Mirador del Quer, also known as Mirador de Canillo, is actually a 20-metre long footbridge. Eight metres rest on the ground, while the remaining twelve cross the panorama, turning into a footbridge over the void that makes you feel like you are floating or flying.

During the visit, you will be the master of the Pyrenees.

The magic happens thanks to the transparent glass floor that increases the sensation of height and gives you the impression of flying.

This work is located in the place called "Point sublime" in the ski resort of Arcalís, in the parish of Ordino.

The author of the work, Mauro Staccioli, represents "the opposition between natural law, not the law of nature, and the law of man, between minimal forms and the complication of nature, between a cold and objective world and the subjectivity that lays the foundations of our way of being".